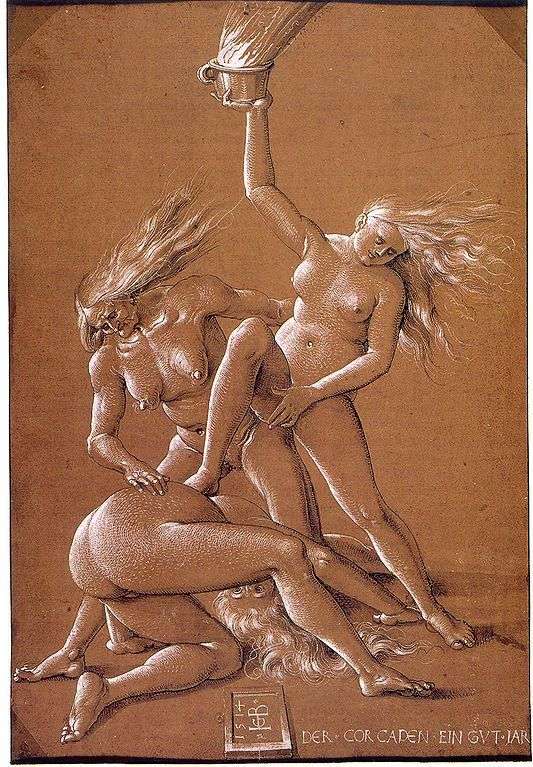 Artists at all times in their works expressed the worldview of the era in which they lived and worked. The heyday of the talent of Hans Baldung Green was at the turn of the epoch – the transition from the Middle Ages to the New Time, and in art – the transition from Gothic to Renaissance ideals. The Northern Renaissance in Europe has its own artistic features and dignities.

Any transitional period is full of contradictions. Old concepts and concepts are very tenacious in the minds of people. The people believed in sorcerers and witches, the evil eye and spoilage, everything new frightened and alarmed. During this period, the Inquisition still existed, everywhere bonfires burned on which the witches were burned.

The churchmen mercilessly persecuted all the dissidents. To fall into the hands of the Inquisition, where there was only one way – to the fire, it was very simple, it was enough to denounce an offended neighbor or fanatic. Most often in witchcraft, women were accused.

Witch could even declare a woman collecting medicinal herbs. The manufacture of medicines or potions was charged with guilt, for it was believed that it was from the unclean. There is a known case when a woman was sent to a fire, who predicted the rain – she was accused of being associated with the devil.

Belief in Witchcraft was especially common in southern Germany and in Alsace, where Hans Baldung Green worked. In 1487 they published the famous treatise “The Hammer of Witches”, written by the Dominican monks J. Sprenger and G. Institiris, the “witch hunt” that followed, flooded the city of Europe with blood.

The theme of witches, a spontaneous beginning in human nature, appeared in the artist as far back as 1510, when his first such work of the engraving “Three Witches” was created. Nude female figures personify the unbridled strength of mother nature.