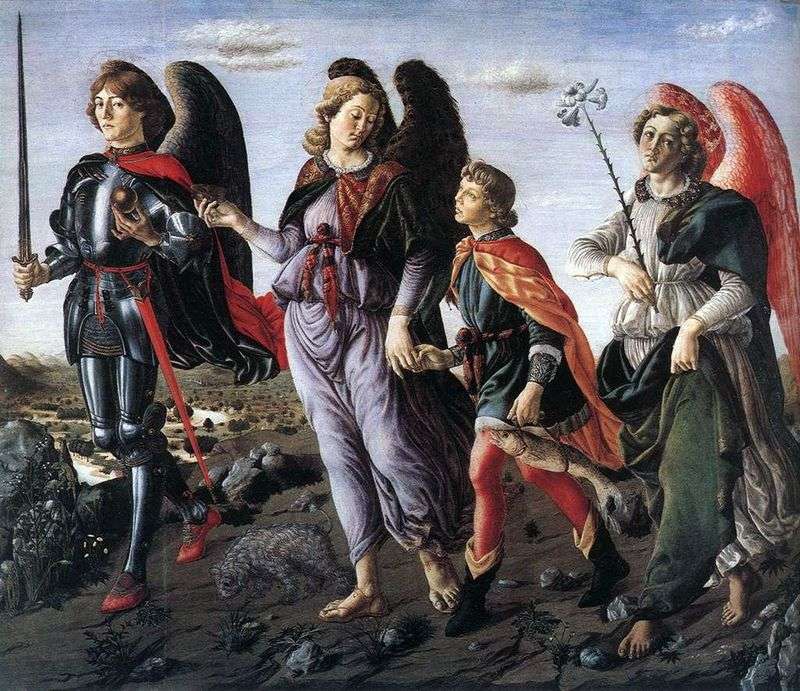 In the picture you can see traveling to Tobia, and the wise Archangel Raphael, and the serious Archangel Michael and the dreamy, gentle Archangel Gabriel. According to the biblical tradition, the Israelite Tobit lived with his family in Nineveh. He was a very pious and kind person, with wealth – he always helped with his fellow tribe. But hard times came for him – Tobit was impoverished and blind. He remembered then the ten talents that he had deposited with the Israeli, who lived in the Rages of the Medes.

He summoned Tobit his son Tobias, gave him a will in case of his death, handed over a receipt and ordered to find a man who would agree to conduct it. Such a man was found and they set out on their journey. There was a lot in the way of adventure. But everywhere the satellite of Tobias helped him with good advice. Tobias returned home, cured his father and brought money. . It’s time to part with a good traveler. In gratitude, the father and son offered him half of the estate, but he replied: “It’s a good thing to keep the secret of the tsar, but it’s commendable to proclaim the works of God.” Do good and evil will not overtake you. to collect gold… I am Raphael, one of the seven angels who bring up the prayers of the saints to God. “