Home ⇒ 🎨Bassano Jacopo ⇒ The worship of the shepherds by Jacopo Bassano 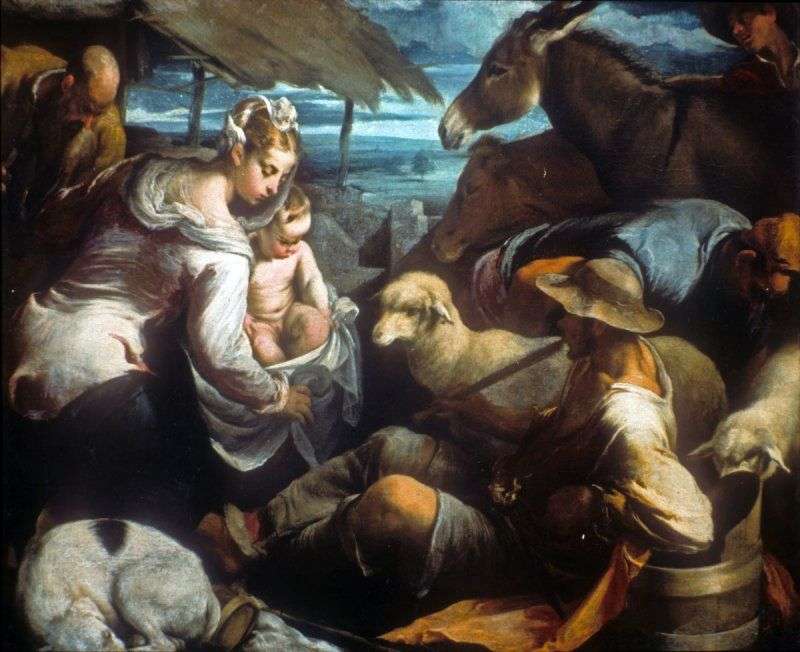 The works of Jacopo Bassano, whose painting belongs to the Venetian school, are colorful, multi-figured and filled with movement. In them there are features of Mannerism and noticeably the baroque trend, although also light. The master loved tight compositions with characters depicted in complex poses, which in his paintings look natural.

Thus, the Mother of God in this “Shepherds’ Adoration” stands half-turned to the viewer, and this perspective allowed the artist to convey Her delicate and gentle profile, trepidation and grace. At the same time, with the figures of Mary and Joseph standing behind her, a complex movement begins in the picture, which goes from the Mother of God to the Child, then to the shepherd, deployed sideways to the front plane of the canvas, and returns, describing the “eight”, to the beginning.

Despite the fact that only a few shepherds are depicted, it seems that the ones who came to pay homage to the Babe are many. There is literally no space on the canvas: Bassano put here the sheep, the dog guarding the herd, and now curled up in the corner, present at the birth of Jesus ox and donkey. This work recalls the words from the 150th Psalm of David: “All that is breathing let us praise the Lord!” The sublime inner state of the shepherds echoes the subtle, lyrical mood created by the images of the Mother of God and the Child, as well as the evening scenery in the distance.