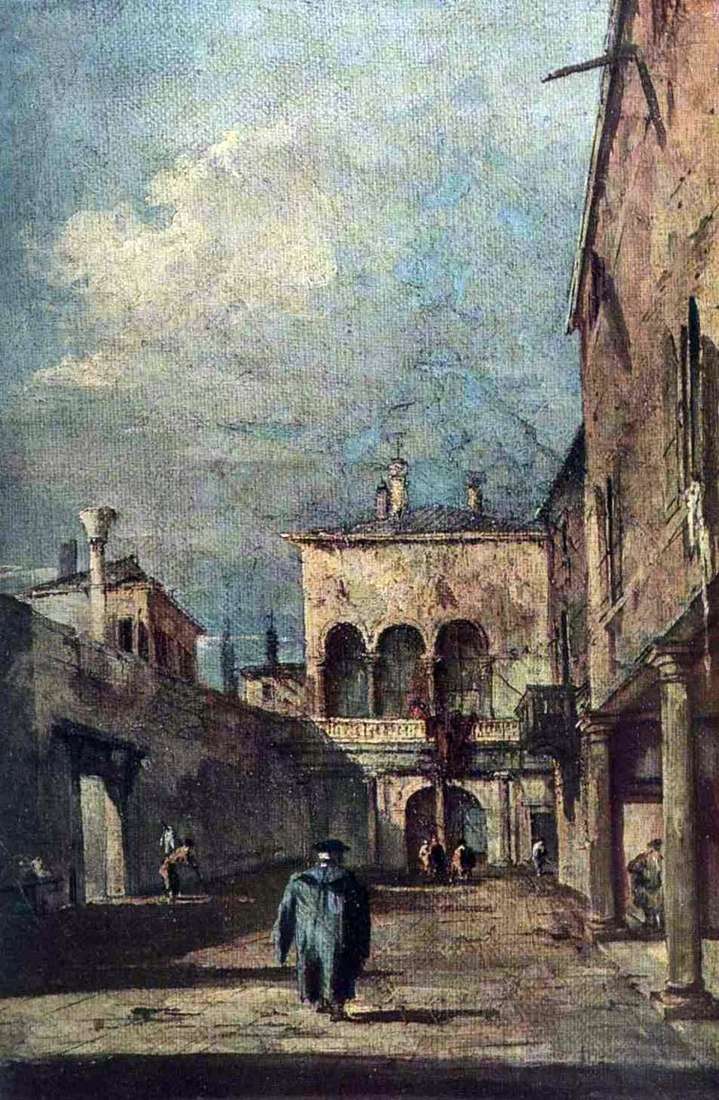 Venice of the late XVIII century. was a major European port center, a fairy-tale city, a dream city. Many travelers aspired to this part of Italy, driven by numerous stories about the rich past of the country and about the extraordinary magnificence of the Venetian streets. Once, once, I wanted to come back again and again, which, unfortunately, was not possible.

Therefore, most visitors began to order local artists paintings with views of the city, then to take them with them. So in the Venetian pictorial school a new trend was born, the adherents of which created the leads – picturesque or engraved images of the surrounding areas. The largest representative of this direction can be called Francesco Guardi. Creativity Guards was the last vivid embodiment of the best traditions of Venetian painting of the XVIII century. and largely determined the framework in which the development of the realistic landscape will take place at the beginning of the next century.

But even the Guard had predecessors. Here it is necessary to name the names of Canaletto and Michele Marieschi, who discovered the genre of the urban landscape in the Italian fine arts. Guardi continued and deepened their creative search. From his teachers, he adopted the idea that the picture is enough to convey the overall impression, and the missing details can be restored by the spectator himself. Therefore, his paintings differ in bold and free strokes and the refusal to carefully draw nature.

Working on the types of cathedrals or quiet courtyards, over images of canals or squares, the Guards allowed themselves to think something out, omit something, change something on the canvas. And you can not say that this picture was worse. On the contrary, they acquired even greater appeal and, like no other works, recreated the special atmosphere of Venice.

For example, in the picture “View of the Church of San Giorgio Maggiore in Venice” you can see if you look closely at what gondoliers are written out with a few strokes. But these are not random and gross brushstrokes. Before applying them to the canvas, the artist carefully thought through their intensity, direction, location. As a result, the strokes turned out to be so precise that it is worth moving slightly away from the picture – and the illusion is created in its entirety.

But Guardi appealed not only to those motives in which it is easy to reveal the image of Venice by external features, but also to those in which the main place was given to the poetic feeling. Such are the numerous chamber landscapes of Venetian streets and courtyards, full of the sensations of quiet lyrical tenderness and intimate mood. A vivid example of the features of the creative manner of the artist can serve and stored in the collection of the Museum of Fine Arts. A. Pushkin in Moscow, a small picture of the artist called “The Venetian Yard.”

As in all of its urban landscapes, the Guardians here also do not aspire to the exact transfer of architecture and detailed elaboration of the image. In the landscape, the most essential is grasped. It is important for the artist not to capture what his eye sees, and spiritualize and lyrically tell about his native city. For him, the price is not a “statement of facts”, but a purely subjective attitude to the person depicted. After all, only so you can tell the spectator the spirit and atmosphere of Venice, prisoners in its gray streets, cozy courtyards and desert lagoons. But when the details recede into the background, light and color take on a leading role.

All the boundaries of objects are written out Guardians are indistinct, they seem to be enveloped in a kind of haze, which gives rise to the illusion of space and unites all elements of the composition into a single whole. Gradations of color, the game transitions of light and shadow help to feel the depth, the internal dynamics of the picture. This is facilitated by the very technique of writing. Quick, light brush strokes enliven the canvas, create a vibration of the atmosphere and convey the trembling of life itself. The thick shadows and haze of moist air fill the picture with warmth, and the leisurely pace of a man fascinates, causing the viewer to follow the traveler in a blue cloak inside the courtyard. Focusing on the feelings that have arisen, you clearly feel the silence and languor around. Probably, this is the same feeling that Guardi himself tried to share with the audience.