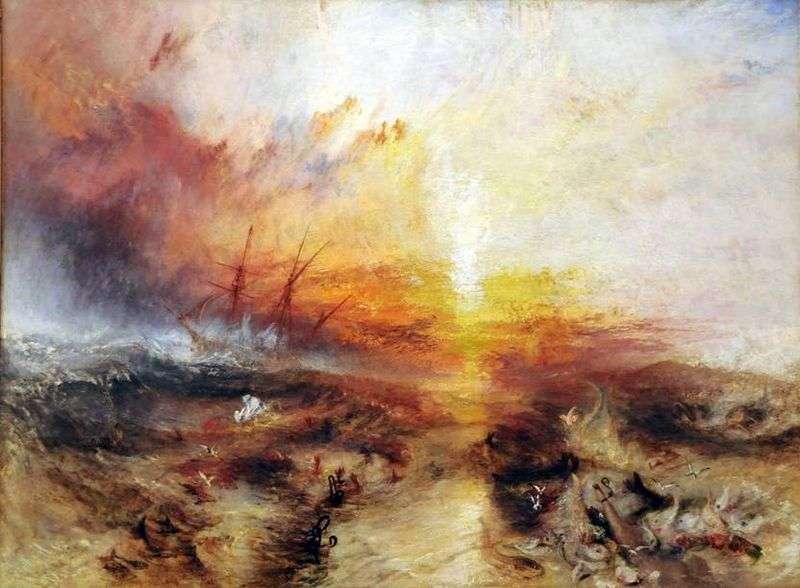 One of the most shameful episodes in the history of Britain is at the end of the XVIII century, and is now referred to as the massacre at the “Zongo”. At the end of 1781, the British slave ship “Zong”, contains 442 African slave, was carrying a “live” product from Accra to Jamaica, but the ship has gone astray because of a navigational error and a few weeks wandering through the Caribbean Sea.

The vessel cholera epidemic broke out, fresh water reserves are being depleted, and the crew headed by no means gracious captain decides to throw overboard “extra load”: November 29, 54 related to women and children were thrown through the cabin window to the sea, two days 42 male servant, then another 36. on arrival in Jamaica number of slaves, left to “Zongo” ship was 208 people, one was sold for 36 pounds.

What made the members of the Liverpool slave syndicate accept such inhuman, cruel, inhumane decision? The thing is that the syndicate in advance to insure the life of transported slaves, and could claim damages from the insurance company’s coverage only if the slave does not die on the beach, not a natural death, namely, into the sea to save the rest of “the goods”. The insurance payment was 30 pounds per head.

The public became aware of the mass murder only after 18 months, but as a vivid example of the horrors of the slave trade actively contributed to the growth of the abolitionist movement in Britain and abroad. The tragedy in the Caribbean is reflected in the works of many artists, and among them was the great Joseph Mallord William Turner – the master of the British romantic landscape.

Most of us know how Turner traditional English landscape painter, who could skillfully convey the hidden charm of England, made her sentimental sophisticated features – in short, the singer of romantic image of Albion, the country where if there is no poverty, class injustice and human suffering. That William Turner, whose pictures were taken at an exhibition of the Royal Academy of Arts, when he was only 15. That William Turner, who felt deeply the nature of that senseless loved the local neighborhood of London, the Thames and the blinding sunlight.

This artist waiting for brighter prospects, general acceptance, if not for his imminent failure to beat the patriotic drum. After all, there was another England, and therefore another Turner, who knew about the real dysfunctional side of life, there is a place where unemployment, hunger, peasant revolts. He came the war with Napoleon, the artist was acutely aware of the fragility of human existence, the insignificance of humans to natural forces of nature; all ruthless in his truthfulness and harsh simplicity became the subjects of his paintings, frightening tragedy. In essence, this other artist and Turner was present, those who wrote one of the most complex and powerful force for the emotional impact of paintings – “Slave Ships”.

On the verge of sensual madness Turner reached mixing history, reality and imagination, eventually creating a picture of the world, close to the state of the primary chaos. All catastrophic plot fit on this web, is akin to the apocalypse, where giant waves splashing merge with images of sharks and piranhas, turning them into a single monstrous sea power that knows no mercy and mercy.

Needless slave ship is more like a mirage, while the details in the foreground statutory realistic: body parts, chains, chain, seagulls under ominous, bloody hue of sunset, a fierce sun in the first rivet attention with its naturalistic and amazing horror painful death, flowers, drawing phantasmagoria. The sea is barely distinguishable from the sky, more like a boiling pot, which is schematically indicated hand tending upwards, symbolizing the souls of tens of martyrs, ruthlessly thrown overboard to the sharks eating, drawn by the sweet stench of disease and death.

“Zong” is more like a ghost ship image of old sea tales, which bears the stamp of the curse of the crew for their actions. No wonder the original name of the web “Slavers throwing overboard the dead and dying – a storm is approaching.” The artist originally conceived his work on the theme of retribution, where the storm – a symbol of the punishing hand of retribution for the torment of innocent people.

Subject fate pursued him in life: shortly before the death of Turner in a sick, half-asleep delirium were terrible biblical imagery, including the four horsemen of the apocalypse. Death surrounded him everywhere: as a child he lost his sister, and then mentally ill mother, in the last years of his life died of a good father, best friend and ideological mentor Walter FAWCO – a staunch opponent of the slave trade. Perhaps it is all influenced Turner and pushed it back to 60 years ago, to capture one of the most shameful pages in the history of the British Empire.

However, is there a place on the canvas redemption? When you first look at the overall composition seems to be no, because even the sunlight here, along with clouds heaving up all sorts of hellish flames of death sunset shades. But a small spot of blue sky at the top right makes a picture of the motives of Judgment, it gives hope for forgiveness, leniency supernatural forces of nature to the sinful human race.

This painting was exhibited at the Summer Exhibition Royal Academy of Arts in 1840, where Turner was branded contempt, painting it was compared with the slops and kitchen garbage, and the web, which was to induce compassion – provoked disgust among the public and the jury. Of course, it was a premature call his own time, the freedom and latitude of the letter, innovation Turner as a colorist anticipated Impressionism, so he could not be understood by his contemporaries.

According to the then canon landscape it had to be written in muted shades of dark brown, darkened to match the colors on the canvases of the old masters, and Turner did not hesitate to brightness and saturation of the palette. Subject outlines crushed and fused with determination and immediacy abstractionist in the works of Turner at precisely the time when the English Victorian era painting was developed trend paintings, meticulous attention to detail. As often happens with geniuses – Turner was known as a madman whose deeply emotional, expressive art ahead of its time.

History outwardly calm sea hides a much more harsh truth that dare to capture the genius of Turner. He took us, the audience, wherever would not dare to look the other artist. These images are imprinted on the retina of your eye, as if falling into the abyss widened in horror pupil permanently remains in the subconscious.