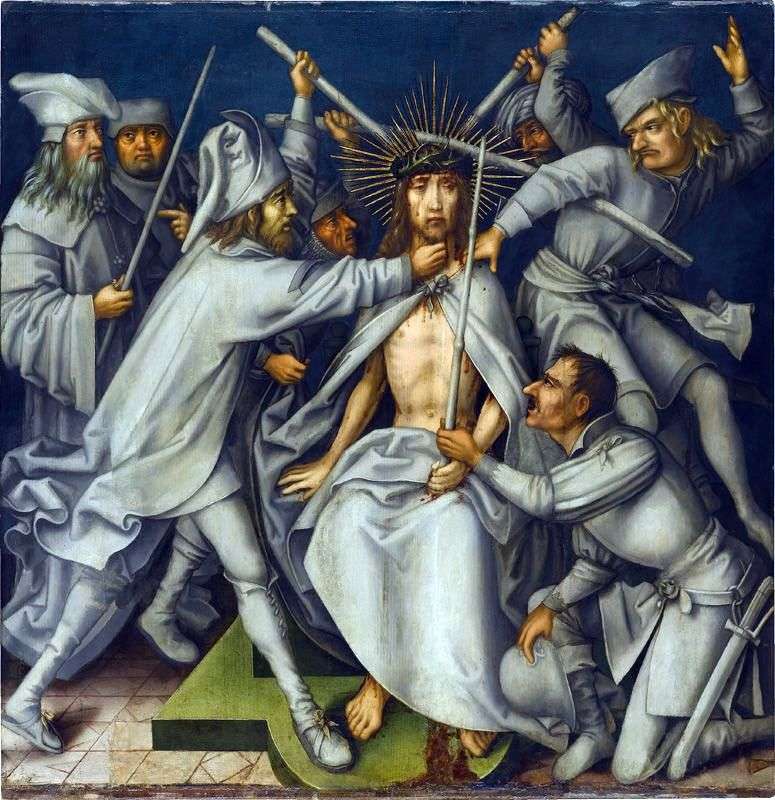 “The Passion of the Lord in gray tones” are considered one of the main creations of Hans Holbein the Elder. The cycle was named after the gray monochrome color scheme, made in the grisaille technique, imitating a sculpture. These are 12 paintings about the last episodes of Christ’s earthly life.

The painting “The Murder of Christ” shows one of the last scenes that make up the cycle of the episodes of “The Trial of Christ,” after which Christ was crucified. According to the Gospel of Mark, “… the soldiers took Him inside the courtyard, that is, into the Praetorium, and gathered the whole regiment.” And they put Him in scarlet and plaited the crown of thorns, laid on Him, and they began to greet Him: rejoice, King of the Jews And they beat him on the head with a cane, and spat on him, and kneeling, bowed to him. “

Christ was usually depicted on a throne set on the podium, he had a crown of thorns on his head, he was dressed in scarlet and held a reed scepter. Warriors with clenched fists are ready to hit him or drop him in front of him on their knees in mocking respect.

According to the widespread rules that prevailed in the Italian painting of the XV-XVI centuries, two soldiers were depicted, each holding a cane or stick with which they plant a crown of thorns on Christ’s head, and these instruments at that moment form a figure of the cross.

The crowning of Jesus with a thorns crown, committed by Roman soldiers, was one of the ways to ridicule and mock Christ. The crown was an ancient symbol of strength, government and honor. Wreaths from the laurel in ancient times were crowned with heroes and poets. Romans for Christ woven a wreath of prickly thorns instead of laurels.

As for the crown itself, German and Dutch masters depicted spines of enormous sizes. And in the picture the crown bites into the forehead of Christ, exuding a drop of blood.

Hans Holbein the Elder was the son of his time and portrayed symbols and attributes comprehensible to his contemporaries. And we once again became convinced that Holbein the Elder never stood still in his picturesque manner, he was familiar with the canons and customs of Italian artists, he certainly knew the paintings of the outstanding masters of the Renaissance. At the same time, the influence of Dutch painting is traced throughout his work.