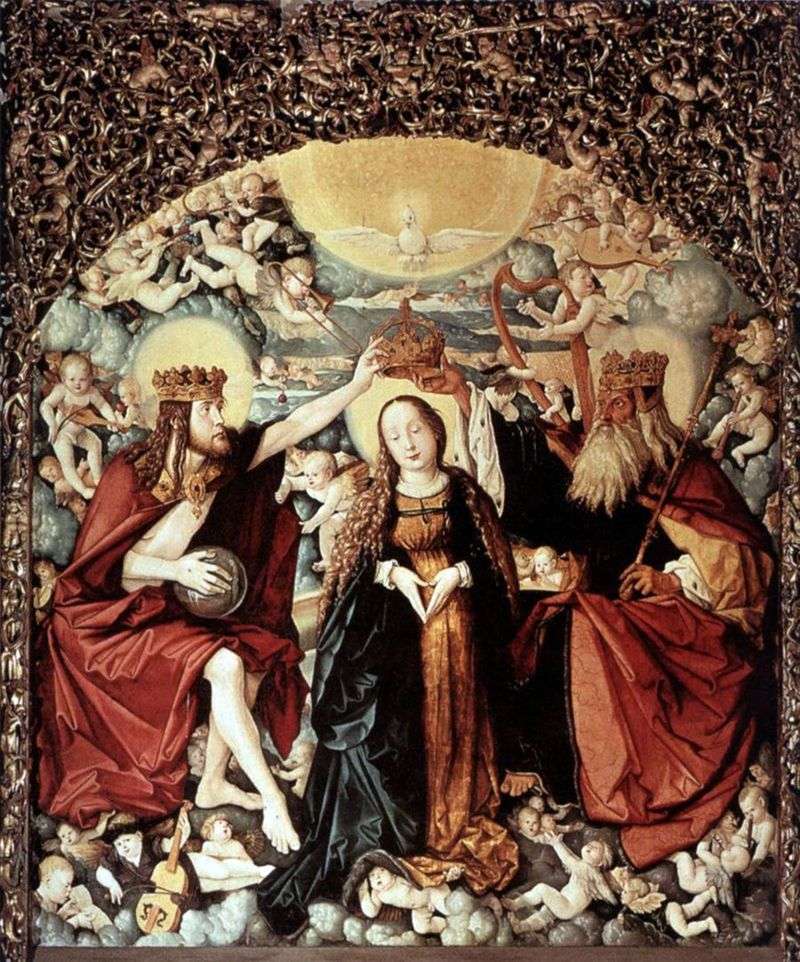 Hans Baldung Green created many beautiful altars. In the German city of Freiburg-in-Breisgau, there is the famous cathedral of Our Lady, which is called the Freiburg Munster. The main altar of the cathedral is the famous painting that the master created in 1513-16.

The altar is considered to be the most significant work of the artist. Beautiful lyrical scenes from the life of Our Lady on the doors of the altar and full of jubilation the central composition of the Coronation of the Virgin Mary. Bright and bold colors, strict and clear compositions, made the altar of Freiburg one of the masterpieces of the Northern Renaissance.

In form it is a two-sided altar triptych. During the year, various leaflets and altar paintings are opened on certain dates and holidays, corresponding to the religious event. During the liturgical church year the altar is open, except for Christmas and Lent. The central part of the Main altar is the Coronation of the Virgin Mary.

“Coronation of the Virgin Mary” – the central picture of the altar. Medieval religious painting is symbolic. There are no random elements and details. The picture reflects the main idea of Christianity – the doctrine of the Trinity. Human reason does not comprehend God, but out of love for his creation, God reveals Himself and reveals Himself to man in three Persons. The three divine Persons are God the Father, God the Son and God the Holy Spirit.

The Virgin Mary hovers in the midst of angels who happily trumpet into trumpets, play harps, lutes, flutes, singing the hymn for the glory of the Mother of God. Above her, the dove is a symbol of the Holy Spirit. To the right of Mary, Jesus Christ is depicted in a red robe, beneath it we see wounds on his chest. On the hands and feet of the Savior are also marked wounds from nails. Christ is crowned with a crown symbolizing the crown of thorns. With his right hand, Christ holds the ball, in it Mary sees his reflection. To the left of the Virgin Mary is depicted a gray-haired God-Father, crowned with a crown with precious stones. God the Father, Jesus Christ crown the Virgin Mary.

The Freiburg Munster is a cathedral cathedral. It should be emphasized that Freiburg did not support the Reformation and its citizens remained Catholics who celebrate Christmas on December 25. Celebration of the Nativity of Christ in the Catholic liturgical calendar is preceded by the Advent period. It always starts 4 Sundays before Christmas. The first Sunday of Advent is the beginning of the church year. Each subsequent Sunday will be celebrated as the second, third and fourth Advent. The Christmas season ends on Christmas Eve on the 24th of December.

During the Advent period, the Main Altar of Freiburg Munster is closed. Closed sashes form a new composition of four panels, which show lyrical scenes from the life of the Virgin Mary.

Now we will look at the altar doors that are open during the Advent period. The first panel on the left is the Annunciation. The artist portrayed the moment when the archangel Gabriel appeared to Mary with the words: “Rejoice, Mary, full of grace.” You will conceive in the womb, and you will bear the Son, and you will call his name Jesus. ” The bright and colorful coloring of the picture makes a strong impression. The artist managed to convey the impetuous movement of the archangel – wings, fluttering green clothes and hair. And the Virgin Mary, having heard the good news, falls on her knees.

The second panel shows the scene of the meeting between Mary and Elizabeth. The Gospel of Luke describes the meeting as follows: “When Elizabeth heard the greeting of Mary, the infant leaped in her womb and Elizabeth was filled with the Holy Spirit, and cried with a loud voice, and said: … blessed art thou among women, and blessed is the fruit of thy womb!” Thus, Elizabeth became the first person to proclaim the Mother of God her future. In the womb of both women the fruits are designated, Elizabeth has the future John the Baptist and Mary has Jesus Christ.

The third panel depicts the birth of Jesus Christ. According to the color scheme, it differs sharply from the rest. The dark background of the picture is illuminated only by the light of the moon. Maria knelt and folded her hands in prayer. The figure of the newborn baby Jesus is brightly highlighted, and Mary’s face is illuminated by the divine radiance that comes from the newborn. Baldung Green used the artistic technique of contrast, which enhances the emotional impact of the entire composition.

The fourth panel shows the Scene of Escape to Egypt. The story of the flight of the Holy Family to Egypt is found only in the Gospel of Matthew. Righteous Joseph in a dream appeared an angel, who commanded: “Arise, take the child and his mother and flee to Egypt, and stay there until I tell you, for Herod wants to seek the Infant to destroy Him.”