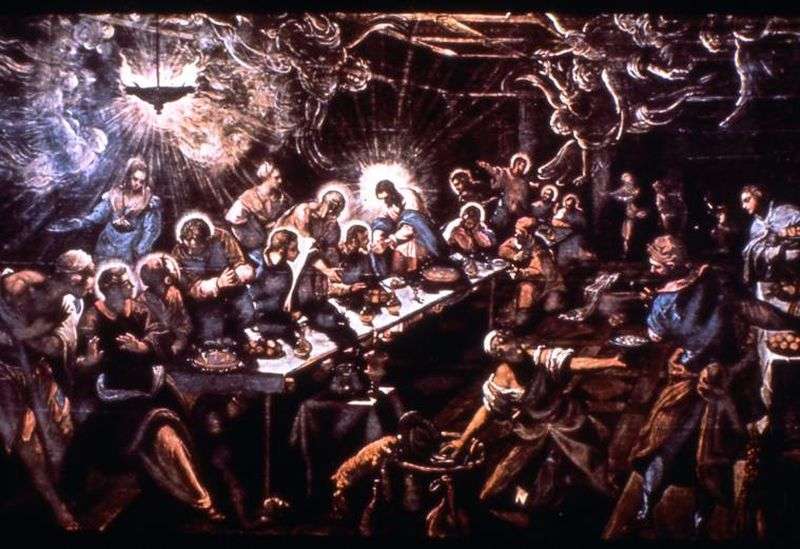 The Last Supper – the plot is quite common in the Renaissance masters. The picture was painted by Tintoretto specifically for the Venetian church of San Giorgio Maggiore, where the picture and remains to this day.

The artist depicted in the picture the moment when Christ breaks the bread and utters the words: “This is my body.” The scene is imbued with a deep spirituality and mystical excitement that gripped all sitting at the Passover meal. The action takes place in a poor tavern, where space, sinking in the shadows, seems limitless; This impression is mainly due to the long table, depicted at an angle to the plane of the picture.

To reinforce prevailing at the table of the mysterious and hard-excited atmosphere of a miracle happening artist resorts to contrast – in the foreground on the right it shows several objects and figures, it is not related to the subject: on the floor are pitchers and baskets of food, which looks into the cat; innkeeper talking about something with the maid, another woman takes off the table with a bowl of fruit, a cat climbs into the basket, all immersed in a life – and no one notices that the whole hosts of bodiless angels appear transparent to the ceiling. There is a bizarre triple coverage: the ghostly glow of angels, flickering light and lamp light halos around the heads of the apostles and Christ.

Tintoretto could thousands of times to watch the exact same lighting effects in some cellar, lit, for example, two candles and a torch – but the artist made these observations magic phantasmagoria. Without this light, the picture might seem quite normal. Tintoretto, in contrast to Leonardo, conveys not the psychology of each person individually, and searches for the collective consciousness, the general mood that envelops the product.

The shimmering symphony of light creates a sense of magic, transforming a simple, seemingly ordinary event in the miracle of spiritual communion disclosure excited small group of people loyal to each other, and the teacher of some great idea. Streams glare exude modest brass lamps hanging from the ceiling; vaporous light swirling clouds are gathering in the disembodied, ghostly images of angels, fabulously quirky light glides over the surface of the shimmering, light up a soft colored glow everyday objects modest decoration of the room.