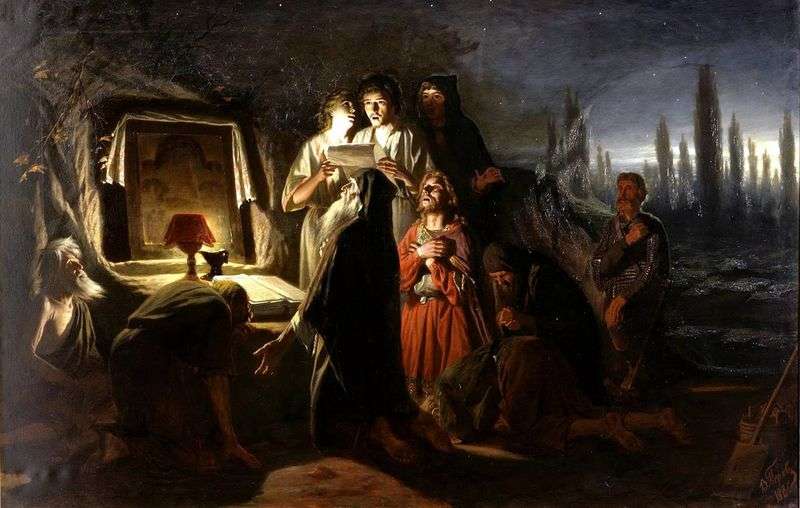 Perov, Vasily Grigorievich famous Russian painter. It is considered the founder of critical realism. Most of his paintings belong to the domestic genre, but in the last years of his life, having survived many disappointments, the author turns to scenes of a more different plan. In the paintings of V. Perov, the Gospel theme is traced. These paintings include his work “The First Christians in Kiev.”

The picture is based on historical events, namely the arrival of the first Christians on the territory of Ancient Russia. Since they had no permanent shelter, they were forced to seek shelter in the caves.

The picture shows the action takes place at night. Some people read Christian prayers, some just listen. In the center of the picture and the crowd on his knees is a priest. Before him is an open book. His hands are spread out in different directions, his head slightly raised. It is evident that all people are not rich. Some even in tatters. People of different age and gender, but all united by one goal.

The author portrayed not the historical moment itself, but its interpretation. He wanted to convey to us the psychological mood of the characters, their experiences and religious feelings. Show how these people believe in a miracle and how they are waiting for him from heaven. This is evident in their praying eyes raised up.

The light contrast of the canvas creates an even more impression of religiosity and even mysticism. People shrouded in a mysterious twilight. The light from the candles is reflected in the cave, creating the appearance of some kind of smoke. In this light, only those faces of people are seen, filled with faith and hope.

Perhaps his picture the author wanted to show that the human faith in the beautiful inexhaustible. It can not be broken or shaken. It will pass through any obstacles.