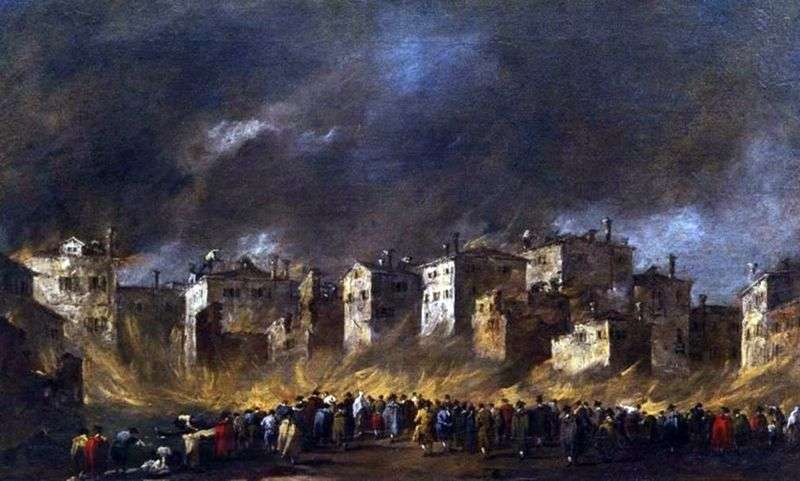 The fire of oil depots on November 28, 1789 in the Venetian Ghetto – another alarming sign, foretold the decline of the great city. The seven-and-eight-year-old artist, despite the discomfort, still made full-scale sketches. One of them, located today in the New York Metropolitan Museum, served as the basis for the picture “Fire in the quarter of San Marquola.” The flames that spilled over to the neighboring houses of the house highlighted the walls and roofs on which the firemen are heroically trying to resist him.

The foreground almost along the entire horizontal line is indicated by the backs of onlookers and sympathizers. In the twilight color bursts a hot palette of shades of reddish and golden colors, so perceptibly conveying the heat of monstrous fire. Dynamic brush Guards with a live smear, transferring to the canvas indiscriminate gusts of the wall of flame, becomes truly free, swift.

The artist does not try to draw a fire, he passes his destructive, all-consuming essence. Such an embodiment of fiery fury, experiments in the field of color will meet only a few decades later in the work of English romantic William Turner. Lessons of the Venetians in many ways will become the basis for artists who in the system of picturesque searches the color was given priority.