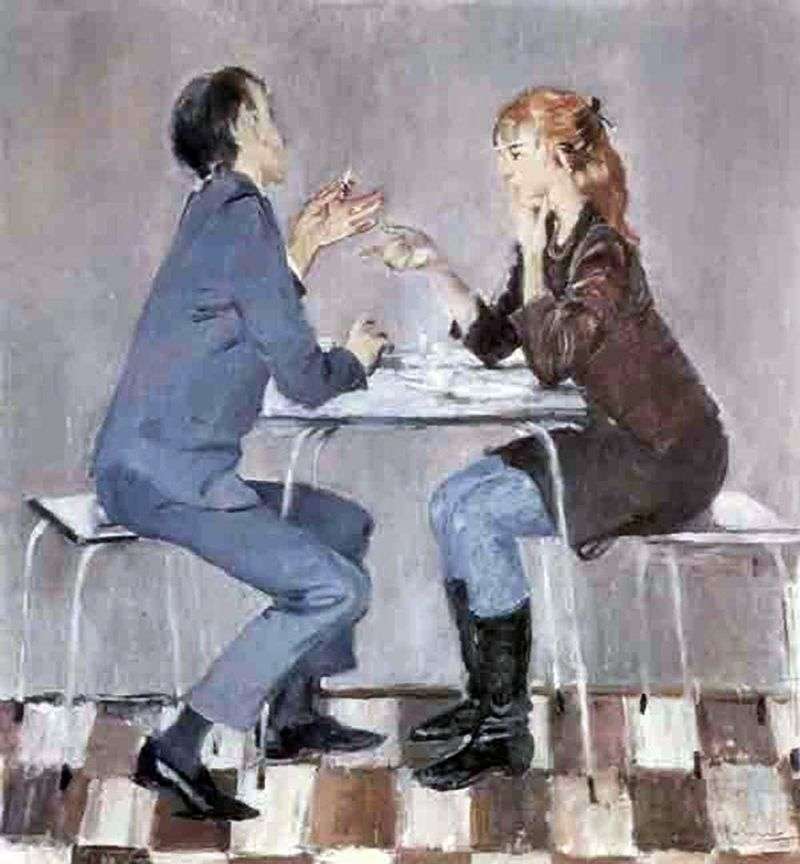 The name of the picture speaks for itself. It depicts a dispute between a young boy and a girl. Most likely, they are studying in some institute, and went to eat in the dining room. This is a typical dining room with walls painted in a gray-blue color, the floor, laid out in black and white tiles in a checkerboard pattern, and simple tables and stools. The dining room is unremarkable and looks like dozens of other similar establishments.

A red-haired girl wearing a brown suit and black boots is sitting at the table. She has exactly trimmed bangs, reaching almost to the eyebrows, and her hair is gathered behind a hairpin or bow. A young man with dark hair, in a gray suit and black shoes, is sitting opposite the girl. They are dressed without any frills, but with taste.

Judging by the movements of the hands, they argue about something lively. This is a peaceful dispute, where everyone expresses his point of view and proves it, while not turning to mutual insults. The girl is holding her chin with one hand, as if she is thinking of something and is looking for an answer to the opponent’s cue. Nobody wants to give in, but the arguments of the young man seem to be more fundamental, so the girl did not immediately find a strong argument for upholding her position and thought. They sit in the dining room and argue, and behind this occupation they completely ignore their environment.

The guy gives more reasoned answers and most likely he will win the dispute. The girl thought, and not the fact that she will find the answer to the words of his interlocutor. Yu. Pimenov could so subtly depict what is happening in his picture that any person looking at it will immediately understand what its essence is and what is depicted on it. The movements of the hands of young people indicate that they are intelligent people who respect the opinion of another person. Their dispute does not turn into a curse, they are allies and simply share their impressions and opinions.