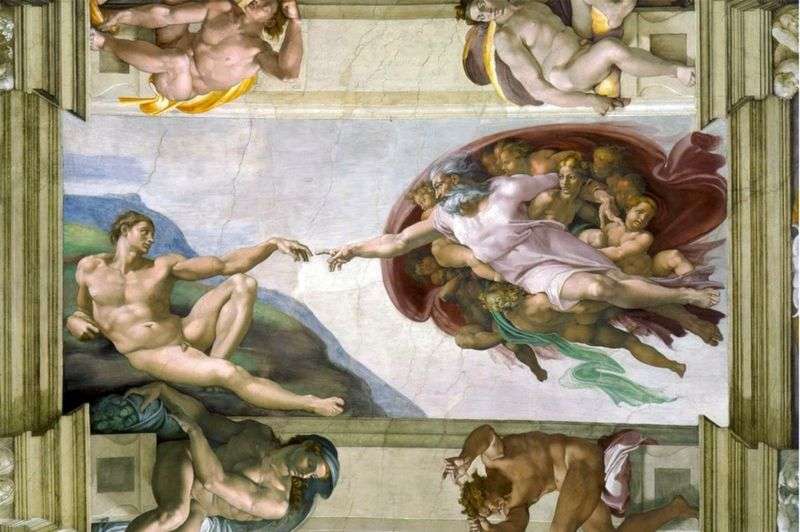 The famous fresco is based on the biblical story from the book of Genesis, and was created by order of Pope Julius II, on the ceiling of the Sistine Chapel in the Vatican. Sign work is key to both religious art and the Renaissance. The original concept of the building included only the image of the twelve apostles, however, when Michelangelo began work, expanded the original idea, and by the time of completion he was able to depict more than 300 figures from classical mythology, the Old Testament and the book of Genesis, in which the Creation of Adam is the central fresco of this work.

Created in 1511, the work illustrates the story of how God gives life to Adam, the first man on earth. Powerful images show the spark of life transmitted from finger to finger, and unsurpassed graphics fill the composition with spiritual and physical energy.

The picture is located in a rectangle measuring about 3 to 6 meters. On the left, the muscular figure of Adam combines all the features of masculine beauty, and the color transmission demonstrates harmony in human proportions. He slowly and idly stretches his limp left hand to God – an elderly bearded man surrounded by a group of angels. His face is filled with apathy, and there is not enough energy even to straighten his arm completely. The Lord gives his life charge with his right hand. The fingers of the heroes are depicted at a distance of several millimeters from each other, which is perfectly visible on a neutral background. It is worth noting that in the history of art this is the first time that God was placed horizontally in a picture.

Such a popular work generated a lot of interpretations and interpretations. Some historians and art historians claim that the figures around God personify the human brain, in which parts of it are depicted with anatomical accuracy. Others suggest that the red cloth surrounding the Lord symbolizes the human uterus, while the green scarf at the bottom is a freshly cut umbilical cord.

However, not all questions related to the mural have exact answers. A lot of theories is devoted to the initialization of women on the left hand of the Almighty. Perhaps she is not yet created by Eve, which, although contrary to the original source, still has the right to exist. Mysterious symbolism suggests a lot of permissions, but it raises even more questions. There is a theory that the outline of God, in the form of an even oval, is connected with the incomplete ellipse that forms his creation.

The creation of Adam demonstrates the full force of the gesture in the visual arts that influenced many contemporary works.

A quarter of a century after the completion of the ceiling masterpieces, Michelangelo was drafted by Clement VII to create a fresco. The Last Judgment on the altar wall. Together with other works, she makes the master not only one of the most influential artists of her time, but also one of the most famous painters in the entire history of fine art.