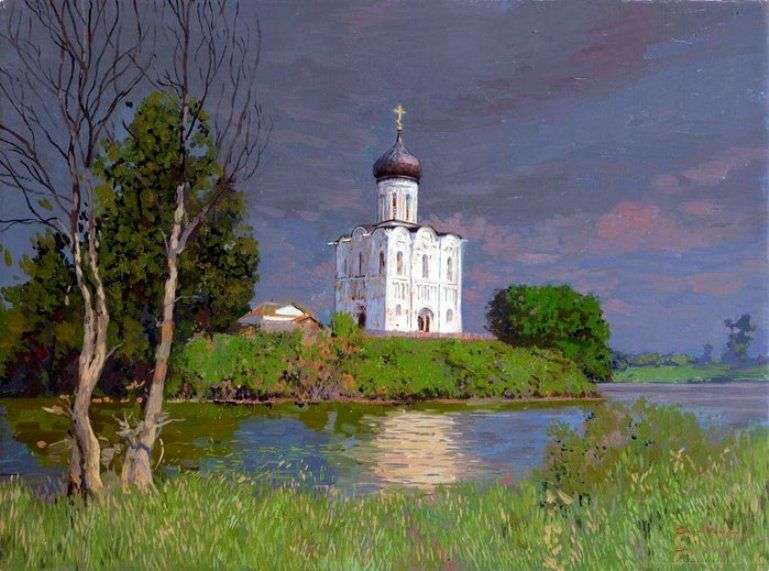 Another famous Russian artist is Baulin Sergey Alekseevich. I consider him to be the master of an architectural landscape. In many of his paintings, the author is very talented depicts architectural styles of different times. His amazing works include the Church of the Intercession, located on the Nerl River.

This temple is not the last among the shrines of Russia. A small and modest church built and named in honor of the feast of the Holy Veil. Many artists, she did not leave indifferent, and now flaunts on the canvases of these authors.

It is on the canvas of Sergei Baulin that the Church of the Intercession is shown close, close-up. Our eyes can see the smallest details and details. If you look closely, you can even look at the beautiful carving that the building is decorated with. The building itself has a very interesting shape, a large square, from the middle of which one dome tends to the sky.

I can not believe that in such ancient times, it was possible to create such beauty. The place to build a temple, too, can not surprise. Believing the stories, they say that Prince Bogolyubsky himself pointed it out. A low mound in the middle of the river Nerl, and then the vast expanses of green meadows passing far into the sky. The hill was poured specially, since in the spring the river is flooded with a wide flood.

On the canvas “The Church of the Intercession on the Nerl” Sergei Baulin depicted a gloomy day. All of his darkness is shown in one sky. It is dark blue, even gray. Clouds heavy and thick closed the sun. On this dark background, the church seems even lighter and brighter, like a ray of light in the dark. So it symbolizes the shrine of good and light. The author wants to show us that whatever the weather or mood the temple will always accept and show all the good and beautiful in any situation. The main thing is to believe in yourself and never to depart from the righteous path.