Home ⇒ 🎨Uccello Paolo ⇒ The Battle of St. George with the Dragon by Paolo Uccello 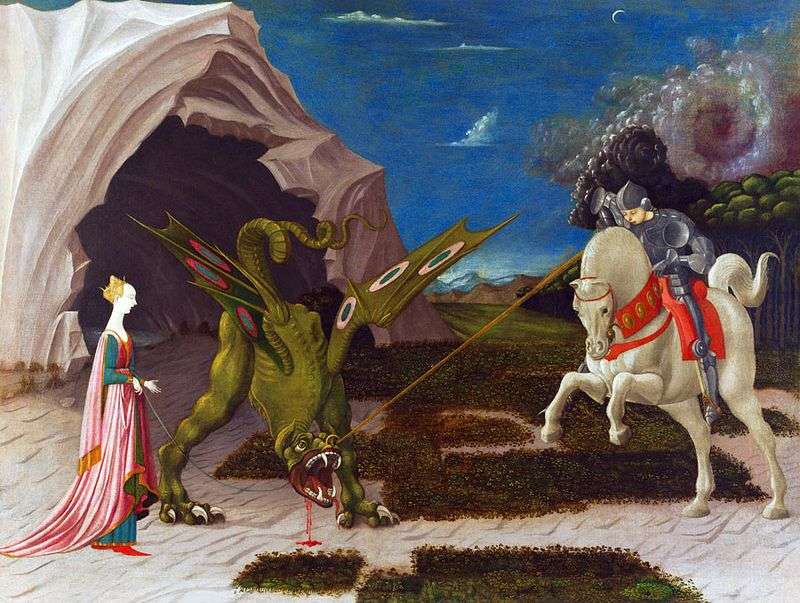 The legend of the battle of St. George with the dragon – one of the most popular stories in the history of world painting. Many artists glorified the deeds of the saint, but none of their works can match the magnificent picture of Uccello. All the elements of this complex composition – a noble knight, a beautiful princess, an abominable monster, a wild landscape, a troubled sky – can not be more harmoniously related to each other.

Unfortunately, we do not know the history of the creation of the “Battle of St. George with the Dragon”, or even the one where it was before 1898. However, for a number of reasons, art historians have determined that it should be attributed to the late works of Paolo Uccello. This conclusion is based on at least three “whales”. First, the artist repeatedly turned to the story of St.

George and the dragon – there is another picture, and in its composition, almost all the same elements as in the “Battle” are used. But it is written with less skill, which allows us to say that the master created it earlier than the picture that we now see before us. Secondly, it is established that the characters of the late “Battle” are dressed in costumes, which were not in vogue until the 1450s. Thirdly, it is written not on a board, but on a canvas,