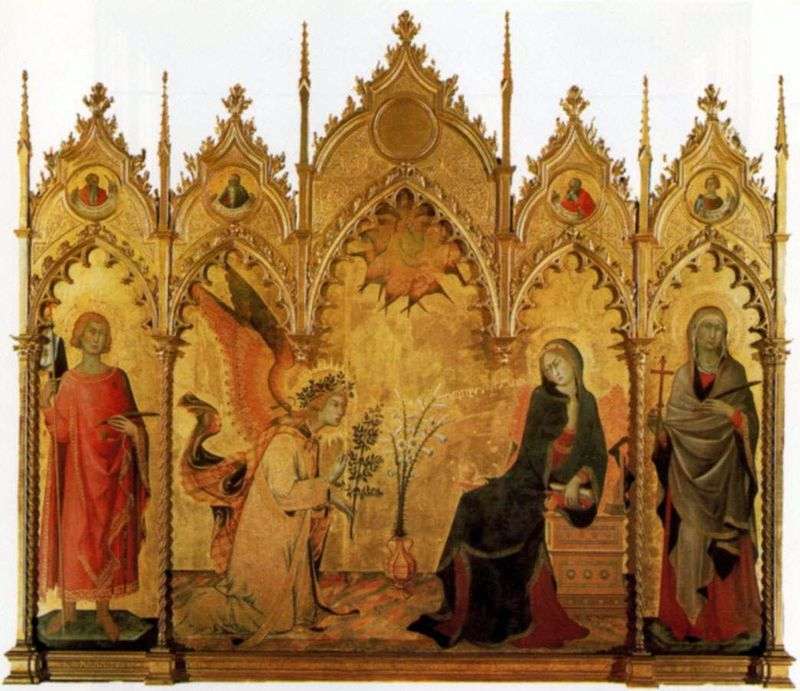 This most famous masterpiece by Simone Martini was performed for the altar of St.. Ansania in Siena Cathedral. The unearthly atmosphere of the Annunciation is highlighted by the brilliant golden background of the scene. In the upper part of the picture, under the central arch in the crown of cherubs depicts a dove – a symbol of the Holy Spirit.

The divine messenger, conveying the good news to Mary, and Maria seem to be joined by the golden letters of greeting: Ave gratia plena dominus tecum. “Maria sits on a wooden inlaid throne, the spatial distribution of which, like the folded book in Mary’s left hand, underlines the reality of her image.

The figure of Mary, who is listening to the good news, was written in an airy, soulful way, although her dark blue cloak and carmine-red clothing peeking out from under it are contrasted with the dazzling brilliance of the whole scene. The figure of an angel, dressed in a brocade robe, is emphasized by the wings with peacock feathers on a gold background and the capricious folds of a decoratively wriggling cloak.

On both sides of the altar there are figures of saints: on the left – of sv. Ananias, to whom this altar was dedicated, and on the right, according to an inscription made in the last century, is depicted in St. Yulitta These two figures are written more plastically, like the images of the prophets in the medallions of the pediments, so some outstanding researchers attribute them to Lippo Memmi, whose name can be read on the lower frame of the picture next to the name Simone Martini.

However, it seems more likely that Lippo Memmi made only the gilding and decoration of the altar, and the painting was entirely owned by Simone Martini, who with two side figures, more sculpted and realistic, wanted to emphasize the supernatural character of the central scene.