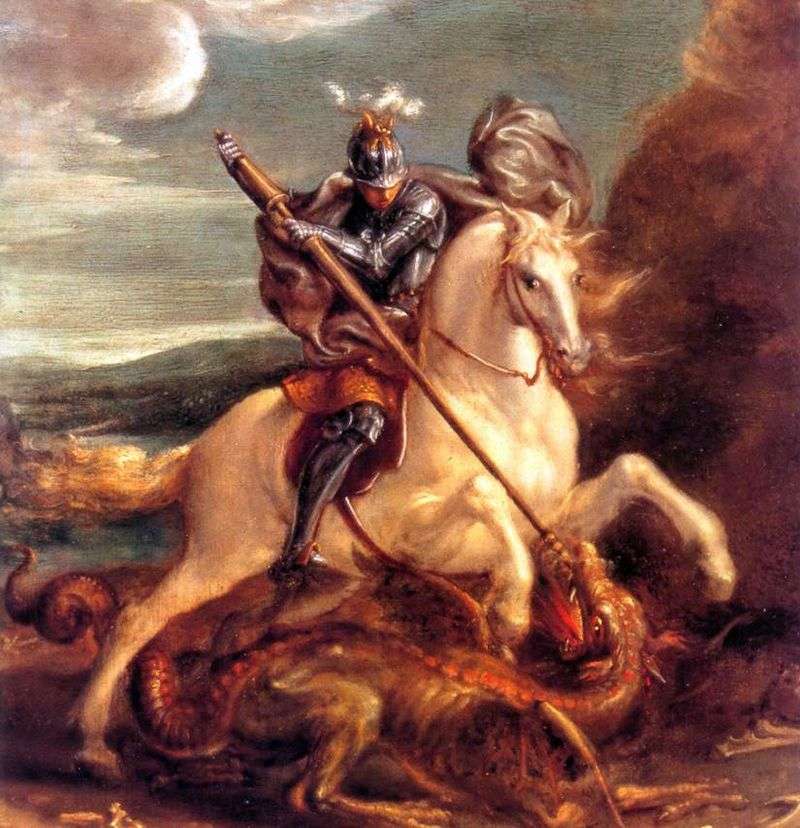 Painting of the German painter Hans von Aachen “St. George strikes the dragon.” The size of the picture is 50 x 56 cm, oil, copper. St. George, the Great Martyr, the victorious, according to the legends of Metaphrast, came from a noble Cappadocian clan, he held a high position in the army. When Diocletian’s persecution of Christians began, George resigned from his military rank and was a confessor of Christianity, for which he was beheaded, after eight days of grievous torment, in Nicomedia, around 303.

There are many ancient lives and legends about the life, deeds and miracles of St. George. The miracle of St. George about the dragon and the girl, as well as his life, originally received literary processing in the Greek East, then in the 10th-11th centuries it passed to the West and later spread widely in European countries.

Its content is that St. George kills a snake, or dragon, which devastated the land of a pagan king, in order to avoid what the king and citizens were forced to give him to eat his children. When the king’s daughter was brought to the sacrifice, St. George as a young warrior and with his word and a cross pacifies the serpent, whom, at his command, the princess, as a sheep, leads her to his city in his belt; After that, the princess’s father and many thousands of his subjects are baptized.

Scientists Bolandists who published Acta Sanctorum, give this miracle an allegorical interpretation and the literal meaning of it is considered apocryphal. But in the people of all Christian countries this miracle enjoyed immense popularity and greatly strengthened the veneration of St. George. In the heraldry and art of St. George, usually portray a young man, a warrior on a white horse, with a spear hitting the dragon.