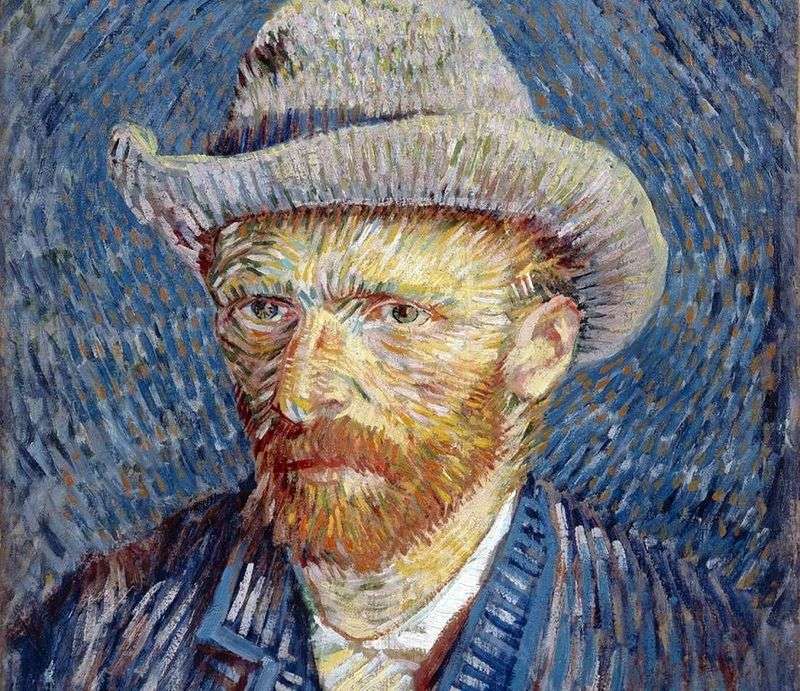 Van Gogh always strived to improve in the art of drawing. For this he often painted portraits of friends and acquaintances, and when the model was not, he portrayed himself. It is even known that, having moved to Arles, the artist specially for this purpose acquired a new mirror. But most of his self-portraits are written in Paris.

On this self-portrait, written in 1887-1888, Van Gogh depicted himself in a blue suit and a gray felt hat. The composition and the plot overlap with the previously written “Self-Portrait in a Straw Hat”, where the artist painted himself in a simple blouse and peasant

headdress. Varying this theme, here Van Gogh appears in the image of a respectable man in a gentleman’s suit, with a serious and hard gaze facing him.

Van Gogh experimented with the technique. In the image, he uses contrasting colors, applying them to the canvas with long strokes. On the face these strokes are directed to the middle, to the point of the bridge of the nose. This makes Van Gogh’s face look even more focused and serious.

A distinctive feature of this self-portrait was a kind of halo, which creates around the artist’s head smears of dark background colors. But Van Gogh did not set himself the goal of portraying the resemblance of a halo. This was the result of experiments on the use of innovative writing techniques. The artist himself considered the effect to be quite successful, and subsequently applied it to other works.