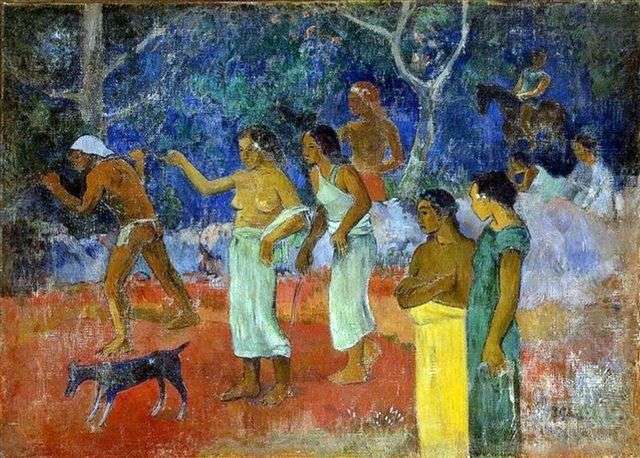 The second Tahitian period of Gauguin became very fruitful. In the author’s collection, there were many hot, life-rich and positive works – Tahitian pastors. “The Scene of Tahitian Life” is a work whose theme is considered art critics to the mythological genre. It’s hard for a common man to judge the fairy tale of this story, because of the ignorance of the myths of the historical facts of Oceania. Sometimes this is not necessary at all. After all, the goal of painting does not always have a specific subtext. It is enough to write a beautiful canvas, and it will become popular.

the subject of the presented picture reflects the originality of the islanders, the features of their behavior, clothing, as well as the landscape of the night nature. Unlike many of the paintings of that period, this one stands out as a confusion of what is happening, a dark palette and anxiety. “Scene” is performed in the technique of dry writing and resembles a fresco with a dry letter. The edges are rubbed to such an extent that the texture of the canvas breaks out, revealing the pattern of weaving threads. The lilac spot in the background looks strange, you might say, superfluous.

It begs the idea that Gauguin simply painted over the unfortunate plot. A character appeared in the work – a man, already remarkable. His torso is tilted forward, as if a hero is preparing to run. The plot is disturbing with its mood, it involves both outside observers and a rider on a horse, even a dog in the foreground with a strain expects something terrible from the night’s wilderness. The fact that Gauguin depicted the night, speaks the blue of the sky – deaf, rich and dense. The moonless sky hangs heavily over the helpless heroes. By the way, the scatter of people on the canvas introduces an imbalance in the composition.

There is no unifying detail, the author missed something, breaking the story into separate scenes. In this picture, there is one more nuance characteristic of the Gogen painting – a planar display of seemingly voluminous details, as well as the absence of shadows that the characters should cast. This omission of picturesque techniques gives the picture a little bit of a shy character. However, this style of writing Gauguin, he guessed and characterizes his identity.