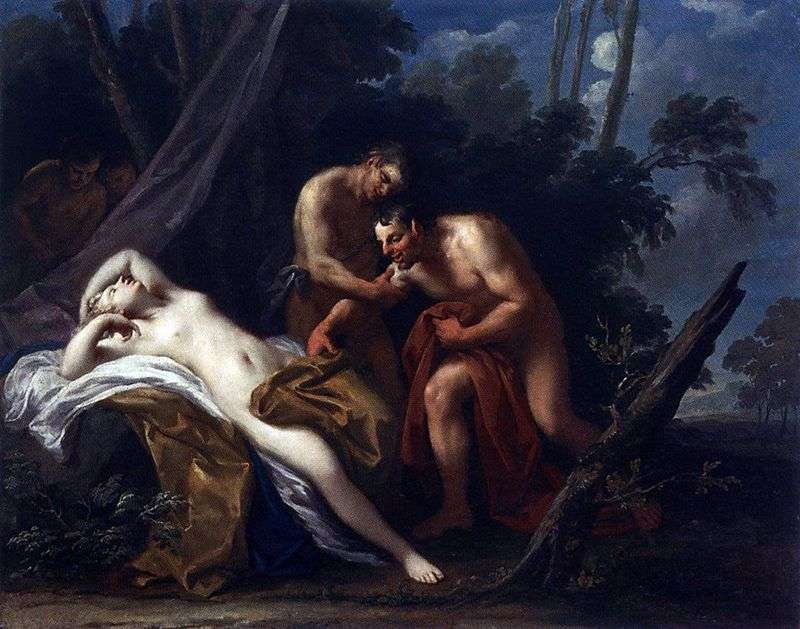 The themes of ancient mythology, narrating about the amorous adventures of the gods, revived with renewed vigor in the art of European rococo, a direction saturated with the spirit of eroticism and hedonism. Amigoni, of all the Venetian masters most closely associated with this culture, refers to a story borrowed from antiquity at first by the culture of the Renaissance, and then by the art of the 18th century.

In Venetian painting, the motif of a lying nude female figure is already found in the work of Giovanni Bellini, and then repeatedly interpreted in various compositions by Giorgione, Palma the Elder, Titian.

Widespread fame used the engraving of Annibale Carracci, depicting a sleeping nymph and immodestly watching her satire. Amigoni repeatedly repeated once found posture of half-reclining Venus or, as in this case, nymphs in the compositions Venus and Adonis, “Sleeping Venus and Putti” and in the painting on the same plot, held at Sotheby’s auction in London on April 12, 1978.

If we assume that Jupiter is depicted in the Hermitage painting as a satire in the form of a satire, then the plot could be interpreted as Jupiter and Antioopa: the sleeping daughter of Antipa, sleeping, Jupiter, in the guise of a satyr, is tempted to seduce her. Amigoni was a vivid interpreter of Rococo, and not an epigone of the French This style proved to be absolutely in tune with his own talent: the soft manner of painting with delicate chiaroscuro, a subtle delicate flavor appealed to aristocratic customers who wanted to see not an antique version of the pastoral, but to octetic improvisation in the spirit of the gallant century poetry. ” The picture can be dated 1730-mi years.