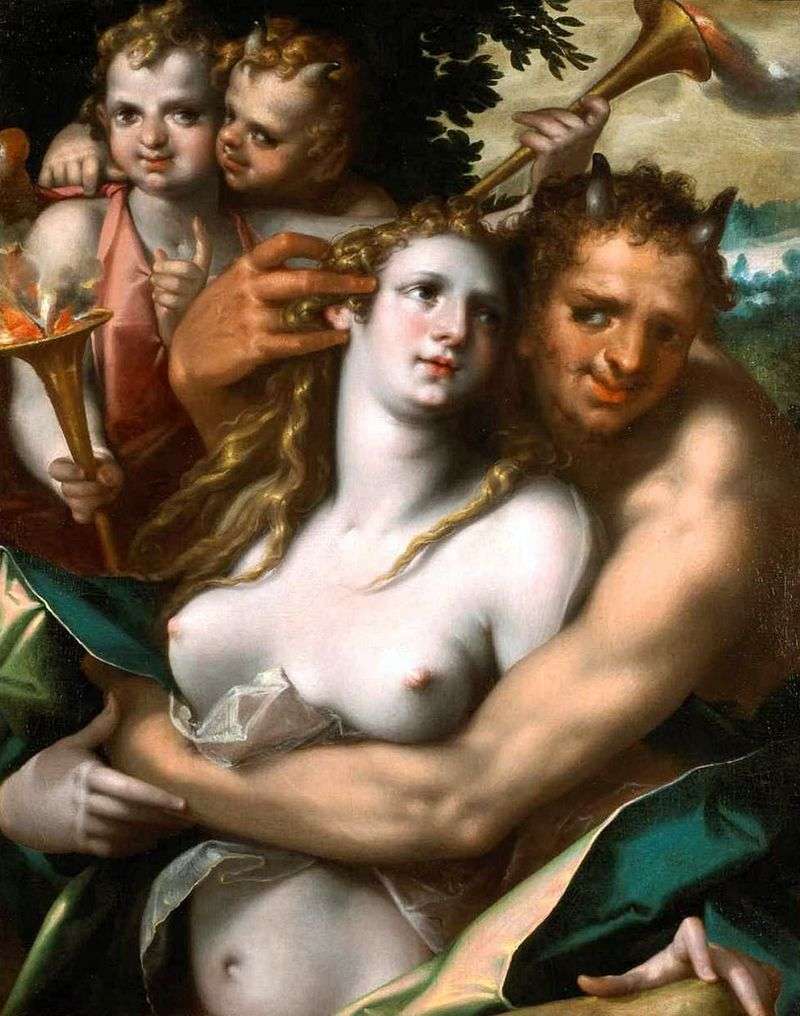 A painting by the Flemish painter Bartholomeus Spranger “The Satyr and the Nymph”. The size of the picture is 110 x 87 cm, copper. The painting was written by Spranger based on ancient Greek myths, also has another name “Mythological Scene”. Satyrs, in Greek mythology, forest and mountain spirits personified the elementary brute force of nature, which is expressed in the animal attributes of their external appearance. According to Hesiod, satyrs have a common origin with mountain nymphs and chubby and are characterized by the poet as an insignificant and ineffectual breed.

Stupid, roguish, prone to leprosy, fond of wine and women, quick and cowardly, they combine the properties of spontaneous demonic forces and goat’s nature, as indicated by the very name of σττυρος. Satyrs have highly developed members, have a blunt nose, pointed goat ears, a disheveled and bristly coat and a small tail behind. They live in forests and mountains, spending time in hunting, dancing and playing music; sometimes they scare and disperse the herds, or watch the nymphs, or participate in the wanderings of Dionysus, jump, drink and participate in orgies. Ancient art depicted satyrs as old, bearded creatures of disgusting appearance.

In time, however, a new artistic canon of depicting satyrs was created: the younger Attic artists began to portray them as gentle young men, engaged in nature in various ways, collecting grapes, preparing wine, performing musical exercises, or participating in the orgies of Dionysus in the company of maenads. In addition to satyrs, in works of art there are also wives and children of satyrs. The eldest of the satyrs was called Silenus. Nymphs, in Greco-Roman mythology personification, in the form of girls, living elemental forces, observed in the murmur of the creek, in the growth of trees, in the wild charm of mountains and forests. They lived in groves, near springs, in shady mountain gorges – in the bosom of nature.

Often nymphs induce madness and frenzy, send a prophetic gift and frenzied inspiration; to such inspirers – nymphs are, for example, muse. Nymphs of the mountains were called oreads, nymphs of forests and trees – dryads and hamadriids, nymphs of springs – naiads, nymphs of the sea – nereids. Nymphs were dedicated to grottos and caves, sometimes sanctuaries were built, especially in rich vegetation and irrigated areas, later in cities. To the nymphs, goats, calves, milk, butter, wine were brought. As the personifications of the charm of nature, they were portrayed in art as beautiful young girls with wonderful hair, with a dress from wreaths and flowers, sometimes in a pose of dancing, with bare legs and hands, with flowing hair. The sculptures of the naiads often had as their attribute a shell, which they kept near the bosom, or a vessel;