Home ⇒ 🎨Hiroshige Utagawa ⇒ Sanctuary Massaki on the Utigawa River, the village of Sekiya no sato and the sanctuary of Suilzin no Mori by Utagawa Hiroshige 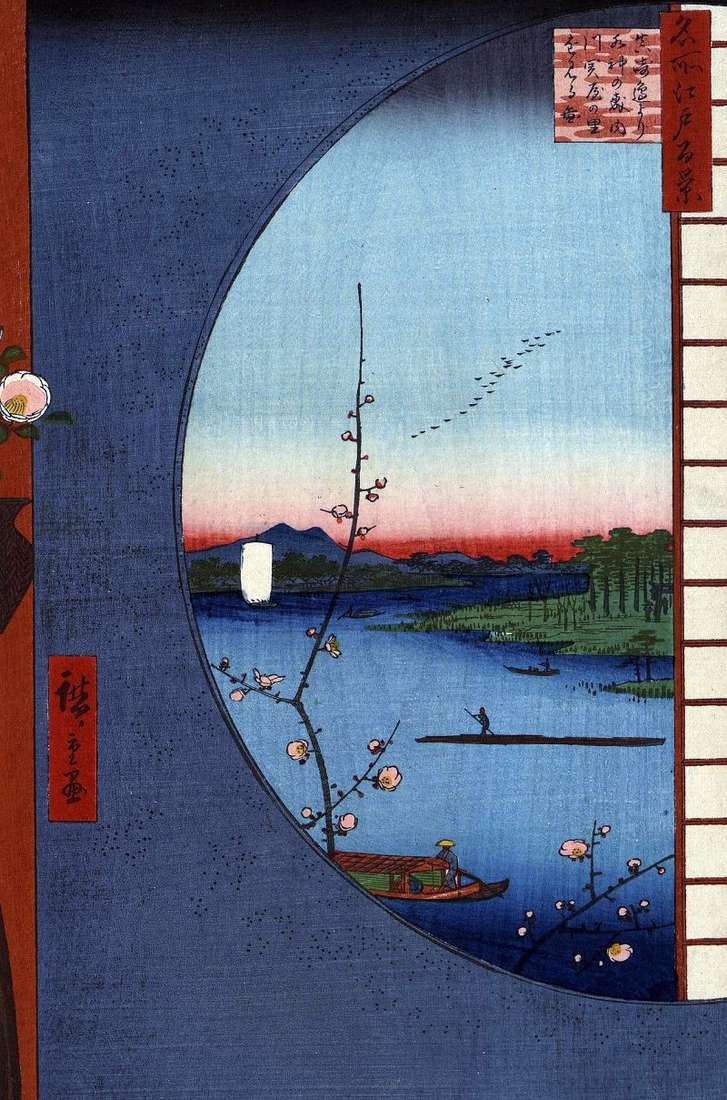 The area adjacent to the Shinto shrine of Massaki Inari-medzin jinja was called Massaki. The temple of Massaki Inari, better known than the other Inari temples in Edo. On the territory of the temple near the Sumidagawa River there were many restaurants with beautiful views of the river. The most popular restaurants were “Kosia” and “Kinoneya”, in which served a special dish of dengaku.

Through the round window of the restaurant, with the shoji, cut off the edge of the sheet, you can see the Sumidagawa River. At the confluence of the rivers Uchida and Sumidagawa, on the peninsula visible in the engraving on the right, there was a Shinto shrine of Suidzin-no Mori, in front of which there were gates – torii. The sanctuary itself is located in the depths of the grove. On the horizon, to the left, are the buildings of the Sekiya-no Sato area, adjacent to the shores of Sumidagawa.

The composition is crowned by the two-headed Tsukuba Mountain, whose western peak is called the male peak, and the eastern peak is the female peak. Tsukuba Mountain is considered a poetic symbol of fidelity and love. In the early version of the engraving shows the time after sunset, whereas in the late red strip of the dawn brings a pink hue in the evening sky. The red strip of the bokashi on top became more intense.