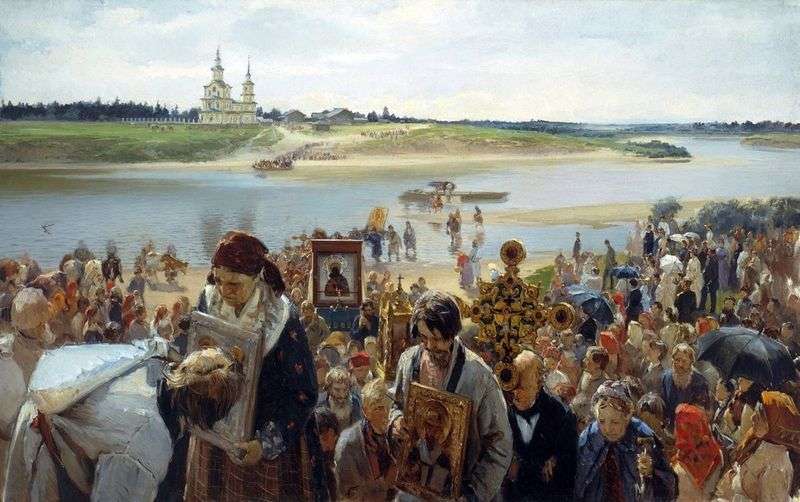 One of the founders of Peredvizhnichestvo, Illarion Mikhailovich Pryanishnikov liked to work with large-scale plots, depicting a large and many-sided crowd, and “The Procession of the Cross,” the last picture of the artist, a vivid confirmation of this.

Due to the complexity and volume of the canvas, no matter how hard the author tried, he did not have time to finish it – he died at the age of 53 years.

This work belongs to the category of religious, the picture shows a large-scale religious procession – the church procession with icons, crosses and banners, characterized by a special solemnity.

Among the universally recognized advantages of I. M. Pryanishnikov is an amazing ability to depict various archetypes of people, harmoniously combining them within the framework of a single plot. So in the picture presented, the motley crowd of villagers instantly ceases to be such, we begin to consider each figure separately. What different people appear before us – well-dressed couples, young girls with flirty umbrellas are mixed with simple grandmothers in kerchiefs and poorly dressed travelers.

In addition to chanting the solemnity of the religious ceremony itself, which can unite completely different people, Pryanishnikov did not miss the opportunity to once again confess admiration to one of his favorite places – the environs of the northern town of Lalsk. It is the Church of the Intercession on Luza near Lalsk that rises above the low huts at the top of the picture.

It is especially interesting to compare the picture of Pryanishnikov with the work of the closest comrade of I. Repin “The Procession of the Cross in Kursk Province”, which is very similar in plot. Compared with the more well-known Repa’s work, Pryanishnikov’s “Procession of the Cross” is deprived of a sharp social conflict, the picture is calmer and more contemplative. Looking at the picture, you can catch a dynamic movement – it seems that this is all about a large, noisy mass of people walking past the viewer, rushing for a large parade cross and icons.