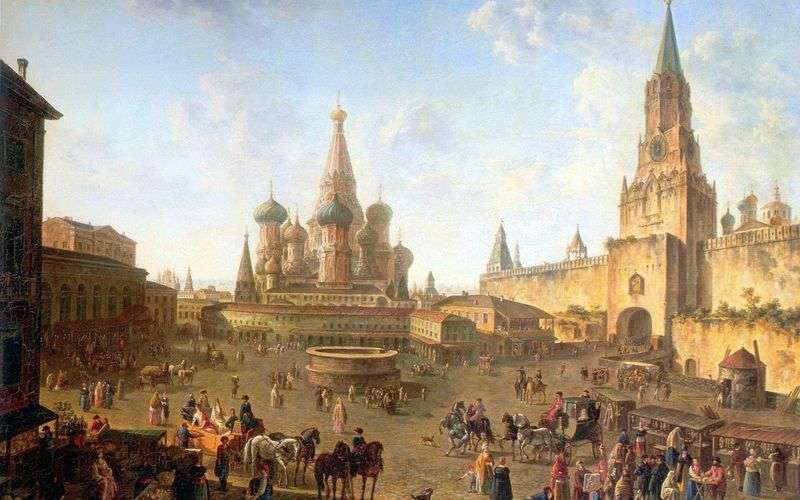 Landscape, painted by the artist oil on canvas during his “business trip” in Moscow, organized for him by Paul I. The task before the artist was the following: carefully familiarize yourself with the way of life of Muscovites and the sights of the city and display it all very clearly and in detail in artistic form. When Alekseev started the assignment, he considered so many places of Moscow worthy to be immortalized in landscapes, which subsequently created a whole series of paintings devoted to this topic.

Red Square is depicted in all its glory. The author was able to thoroughly convey all the subtleties of architectural structures located on the territory of the square. In the center, of course, the main attraction of all times of Rus – the Intercession Cathedral or St. Basil’s Cathedral. Original, beautiful, shining with a variety of domes, he towers above the people gathered in the square.

On the right side of the square is the Kremlin wall. On the left side, the artist painted long trading rows along which a lot of people gathered. Wagons and horses, women in colorful dresses and men behind the counters with goods – all these characters are mixed into one general messy landscape, depicted by the author, and showing the significance of Red Square as a place of trade during the creation of the picture.

A great place in the picture is given to the image of the sky, which seems to cover everything that is below. A soft heavenly light floods the whole area. It is very deeply shown in the picture and very animates and decorates it. A few more architectural advantages, depicted by the background, complement the overall image of the beautiful and integral landscape of Moscow life on Red Square. These are such structures as the library of Vasily Kipriyanov before the Spassky Tower, the arrows of the Ascension Monastery and the tent of the Tsar’s Tower. In addition, very clearly traced Lobnoye place in the center of the square.