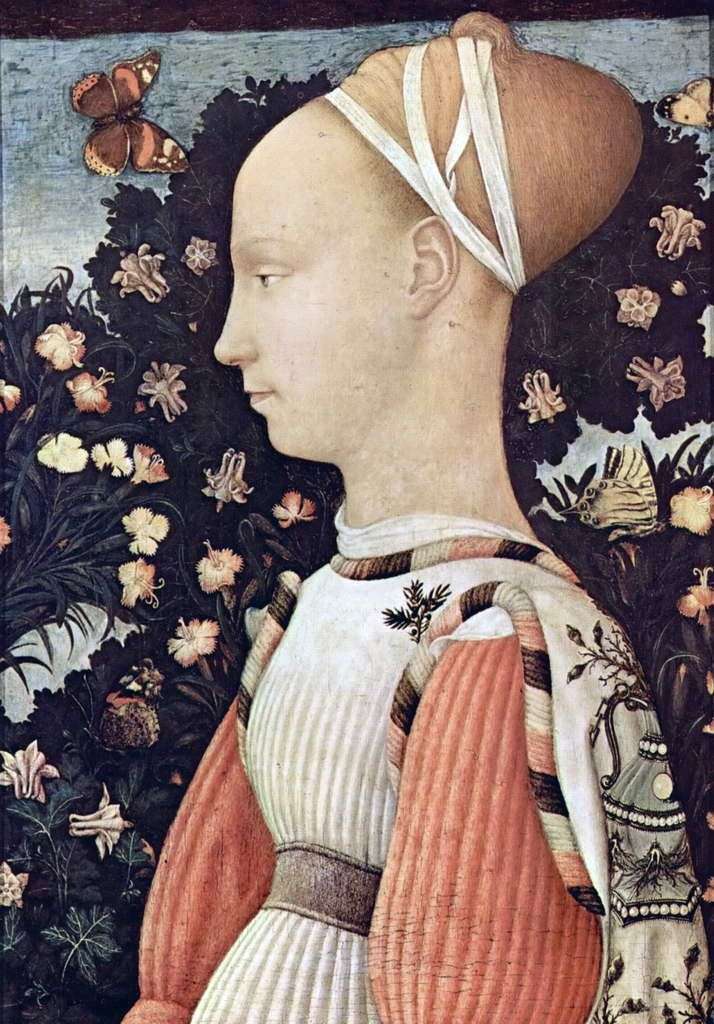 The outstanding talent of the artist found a vivid expression in the portrait of Ginevra dEste, which entered the Louvre collection in 1893. The picture is typical for portraits of the early Renaissance, it lacks a sense of physicality and space. But carefully fashionable dress is written, forming together with his head a clear light silhouette. The background, depicting a blooming garden with fluttering butterflies, is executed in detail, but it does not leave the impression of wildlife, but creates the feeling of a bizarre decorative ornament.

In the 15th century, portrait as an independent genre of painting was only beginning to be realized. And the shape of the biblical profile portrait, common in Italy at that time, is usually associated with ancient medals, which obviously served as models for the first such portraits. Even those profile portraits that were created as completely independent, compositionally, as it were, belong to a certain non-existent whole, are thought to be part of a diptych.

Apparently, therefore, then were so common paired portraits. And although most of the portrait diptychs are not preserved in their entirety, the connection of the image with the already defunct part of the double portrait is clearly felt. All this is guessed in the extraordinary beauty of the female image created by Pisanello – with a secret in her gaze turned, perhaps, to her thoughts or to a mysterious interlocutor.

The princess is depicted in profile, against the backdrop of butterflies and colors of the catchment. It is believed that this is a portrait of Ginevra d’Este, although at first they thought that Margarita Gonzago, wife of Leonello d’Este, was captured in the picture. This portrait was considered as part of the composition, the second half of which was the portrait of Leonello. Opponents of this version claim that usually the paintings depicting married couples had the same size and background. In addition, the flowers in the picture do not belong to the symbols of Gonzago, and on it there is only a vase – the symbol of d’Este.

Ginevra d’Este married the governor of Rimini, Sigismondo Pandolfo Malatesta, and was killed by him when he learned of her fruitlessness. The presence in the picture of the watershed colors led to the hypothesis that Pisanello painted Ginevra’s portrait after her death, in the 1440s. Careful drawing of the details of the background and the colorful atmosphere of the canvas are typical elements of the late Gothic style, of which Pisanello was an outstanding representative of northern Italy.