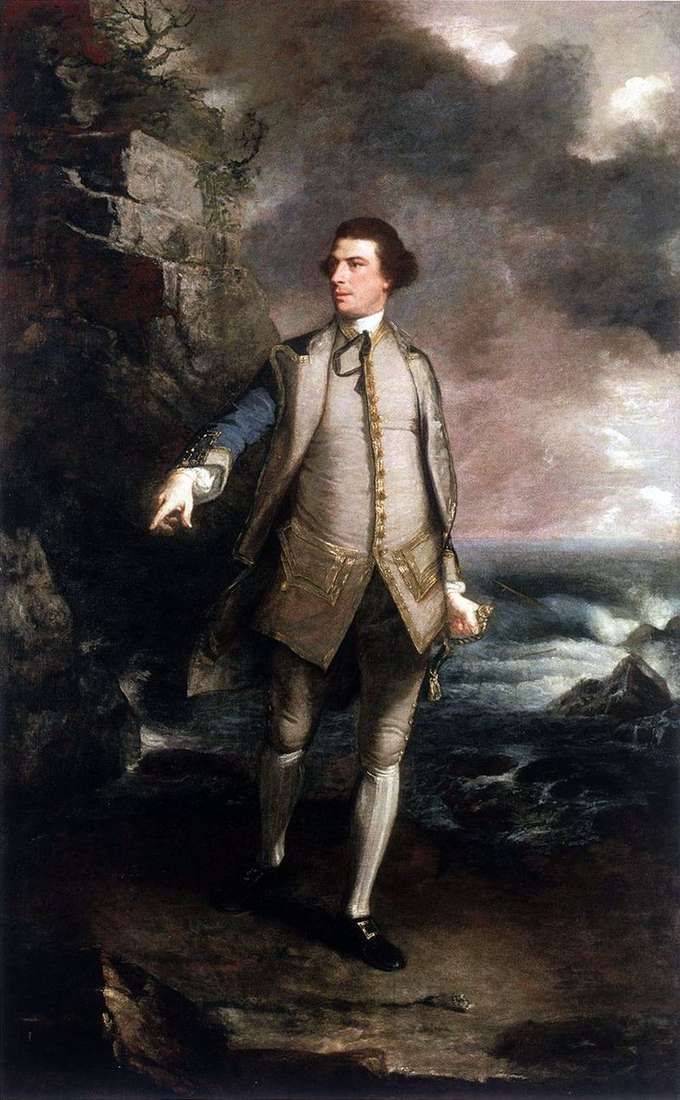 “Portrait of Commodore Keppel” made the name of Joshua Reynolds and became the first step of that ladder that very soon led him to glory. The artist painted this picture in appreciation of Keppell, but she was in his studio for another seventeen years before being transferred to the addressee. Apparently, Reynolds kept the portrait in order to impress potential customers.

“Portrait of Commodore Keppela” demonstrates not only the author’s ability to “draw faces”, but also his remarkable “narrator” abilities. Looking at the picture, we can easily understand the peculiarities of the character of its main character and the nature of its activities. It was this ability to tell in colors the story of the person being portrayed that Reynolds literally “fell in love” with the customers.

Augustus Keppel is depicted in a portrait in a pose that resembles the pose of antique statues. The marine background in this case not only tells us about the Keppel profession, but also, coupled with the general atmosphere of the surrounding landscape, hints at his craving for reckless and dangerous adventures. Written shortly after returning from Italy, “Portrait of Commodore Keppell” indicates that the artist carefully and thoughtfully studied the works of Renaissance masters and ancient art. This is clearly evidenced by the posture of Augustus Keppel. But not only she. The “ancient” ruins, on the background of which the hero of the picture is depicted, give us reason to assume that the author has familiarized himself with the ancient architectural structures of Rome and its surroundings. Deep background shadows contrast sharply with a brightly lit side figure, why Kepplea’s outstretched arm looks especially prominent. All this together makes the portrait of Keppela juicy and voluminous.

Driven by the desire to follow the old masters in everything, Reynolds often resorted to experimental techniques, mixing oil paints with ingredients that at first produced amazingly beautiful effects, but very soon began to destroy the picture from the inside. One of these “insidious” ingredients was bitumen, quickly darkened and cracked. But considerable damage to the paintings of Reynolds also caused other “innovations”.

For example, quite often the artist mixed paints with wax or egg white, putting them in several layers. Differently mixed paints had different drying times and, applied in layers, shriveled and cracked. In addition, the master quite often used in general untested pigments that faded in just a few years. As for the “Portrait of Commodore Keppel”, then, working on it, Reynolds, in all likelihood, used wax and resin, which was the cause of the deplorable state in which this picture is now.