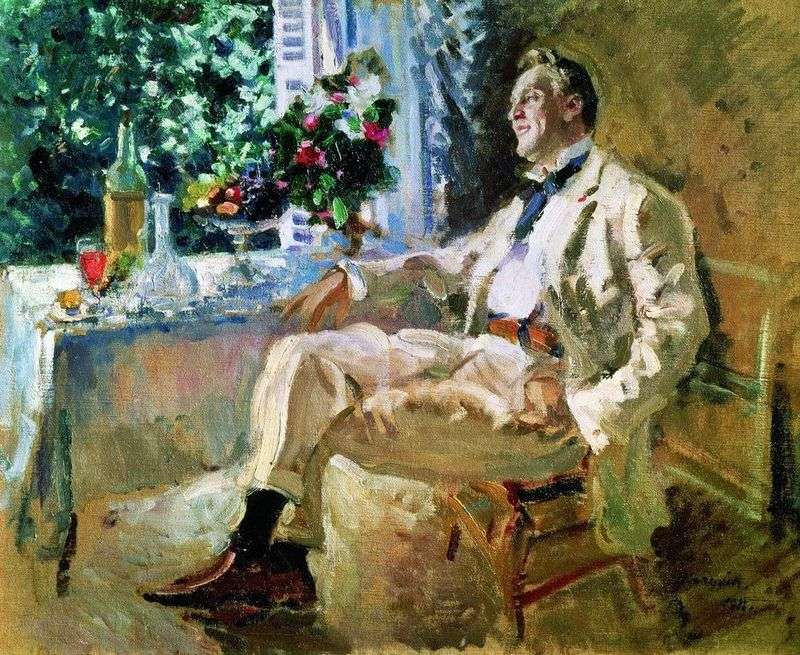 When it comes to Fyodor Chaliapin, unique archival records come to mind immediately, which managed to capture his dense bass and portrait of Boris Kustodiev, where the world-famous opera singer is depicted in a chic fur coat and a fur hat against the background of the winter landscape. However, a very remarkable portrait of this singer was performed by Korovin, and ten years earlier.

Daring-careless technique Korovin is combined with the relaxed pose of Fedor Ivanovich! Painter, who was close friends with the singer, did not begin to portray him in any of his famous theatrical image, preferring Chaliapin-man. He was a sociable, witty and very talented man, a handsome stately man, who had positive bright emotions.

The portrait was written in France, in one of Vichy’s hotels. Here Korovin came to be treated, and Chaliapin came after him and visited his friend. One of these visits was a portrait. At the table, where there is a bottle of wine and glasses, together with a colorful bouquet of flowers Shalyapin sits. The whole of his story indicates that the singer is full of strength and creative energy. His pose is elegantly careless, his left hand is in his pocket, his gaze is fixed on the invisible interlocutor.

A remarkable portrait, which Chaliapin liked very much, nevertheless, was sold to Korovin by collector M. Tereshchenko, to the great distress of the first, and the great joy of the latter. Contemporaries say that after this the singer held his resentment against his friend, although Chaliapin himself denied it all the time.