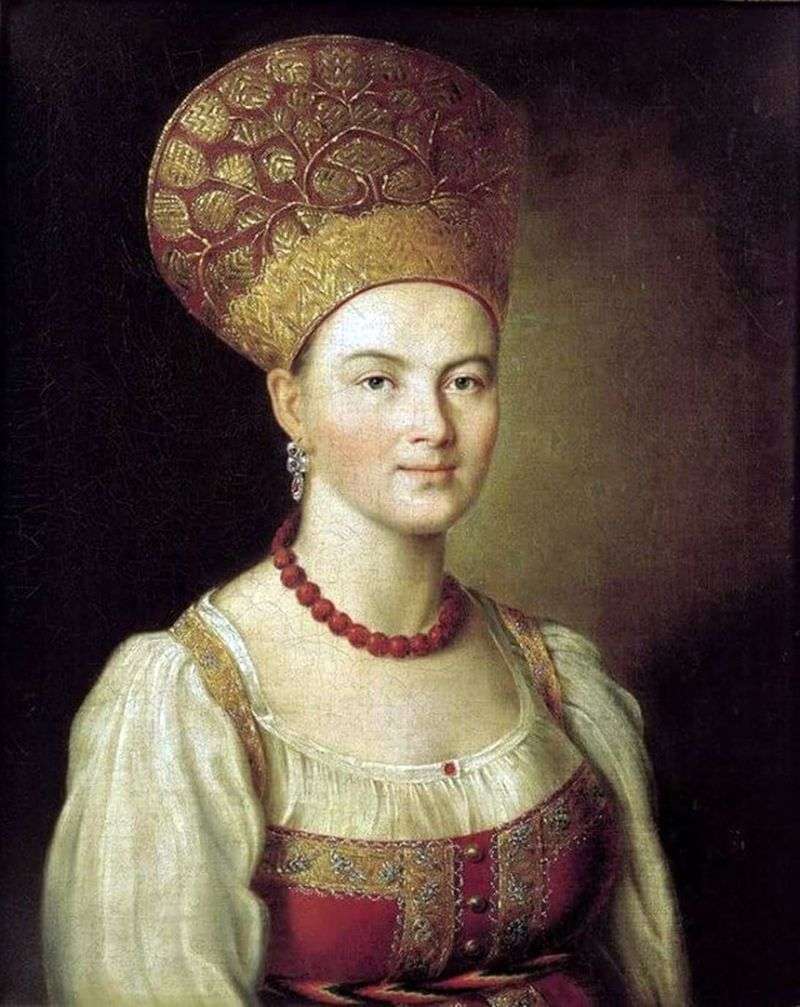 Argunov himself came from the peasant environment, so the main direction of his work can be called the desire to show the dignity and beauty of man, regardless of his class. He happened to write and to know, and commoners. And everywhere he found a divine spark in a man, the feature that made him beautiful.

“Portrait of an Unknown in a Russian Costume” depicts a peasant woman in a traditional attire. But if you do not know about it, or do not think about it, the girl in the picture seems to be equal to noble ladies, with such calmness she keeps. She has a simple soft face. A slightly upturned nose, bruised cheeks, a slight smile on his lips, eyebrows smooth, thin, arched.

The hair is neatly removed under the gold-embroidered kokoshnik, earrings glint in the ears, large red beads are poured on the neck. White clean shirt with a single scarlet bead, embroidered sarafan. She is dressed as if she is going to get married today, or on a folk festival, where the whole village will be.

At one time it was believed that the girl – an actress of a theater, dressed in a theatrical costume. However, no costume is recreated so scrupulously, and no artist will have such a calm and simple face. Rather, the sarafan was taken from the old grandmother’s trunk, and the beads got from the great-grandmother.

The girl’s eyes from the portrait look at the viewer’s past. Watch the game on Ivan Kupala, vows under the holy willows. The owner of them could well walk in dances and sing songs that are as heavy as honey. I could put a bowl with milk for the house-man, comb the hair for the children, harvest and sow. It seemed to embody the spirit of the old way of life, the time of mossy and ancient. And, undoubtedly, she is beautiful, and will not yield to any noblewoman either in feeling of own dignity, or in the enchantment of a smile.