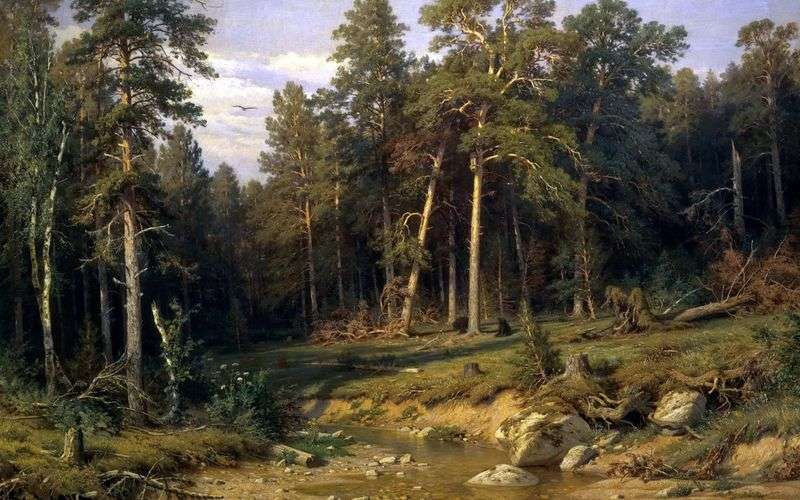 I. Shishkin had a special love for Russian nature. It is impossible not to notice, because it manifests itself in every his landscape. Vyatka province for this picture was not chosen by chance. It is she who is the homeland of the artist. Apparently, the work appeared in one of his visits to these wonderful places. In the picture Shishkin showed a bright, sunny day. The canvas literally radiates warmth, warming us and cheering up. It even reminds something of an illustration to a Russian folk tale or epic.

At the bottom of the flowing brook we can see pebbles, the water is so pure and transparent. Sandy beaches, combined with sunlight, acquire a special shade of golden color. The banks are slightly blurred, and on the left side are visible roots and snags. Coniferous forest looks very powerful and majestic. Sand is not shown by chance. The artist thought through all the details of the picture to the smallest detail, because it is on such soil that the magnificent coniferous forests grow.

Shishkin showed not only trees, but also bushes with white flowers, reminiscent of the field. They grow in the shadows and may even be invisible at first sight. Basically, the pines grow smoothly, like candles. However, there are some who are broken, bent, uprooted. I think this is the aftermath of the storm, the disaster that struck the forest.

I would especially like to mention the artist’s work with light and shadow. Basically, sunlight gets to the foreground of the picture. We see the glare of the sun in the water and on the grass. On a sunny meadow, near the pine two bear cubs sit. One of them is depicted in search of delicacies on the ground, the other looks up at the tree, hoping to find a hive with honey. The depth of the forest is shown in the shade, as if there is an impenetrable thicket. It seemed to me that the sky is very heterogeneous. On the one hand, the pouring sunlight illuminates the clearing. On the other hand, dense clouds speak of an approaching thunderstorm. Against this background, a little ominously depicted kite, lonely soaring in the sky. I think that only a truly loving native land person could create such a wonderful picture.