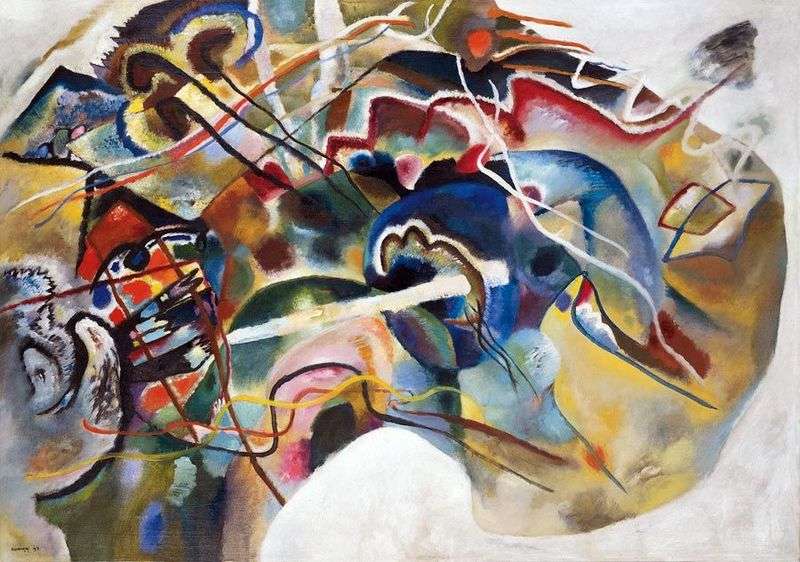 “The picture with a white border” The history of its creation is interesting. Here is what the author of the canvas writes about this: “For this picture I made many sketches, sketches and drawings. The first sketch I did right after returning from Moscow in December 1912: it was the result of those fresh, as always exceptionally strong impressions that I received in Moscow – or, more precisely, from Moscow itself. The first sketch was very concise and restrained, but in the second draft I was able to “dissolve” the colors and forms of the action taking place in the lower right corner.

In the upper left remained the motif of the triplet, which I carried for a long time in myself and already used in various sketches. This left corner should be extremely simple, that is, the impression from it should have been obtained directly, not by a darkened form. In the corner are white teeth, expressing a feeling that I can not convey in words. It, perhaps, evokes a sense of an obstacle, which, however, ultimately can not stop the triple.

Described in a similar way, this combination of forms becomes dull, to which I am disgusted. For example, green paint often excites in the shower the overtones of summer. And this vaguely perceived vibration, combined with cold cleanliness and clarity, can in this case be the most suitable. But how disgusting it would be if these overtones were so clear and distinct to make someone think about the “joys” of the summer: for example, how pleasant it is to throw off a coat in the summer without fear of catching a cold. “

To the white border I approached very slowly. The outline helped little, that is, the individual forms were internally clear to me, and yet I could not bring myself to finish my work on the picture. This tormented me. After a few weeks, I again took out the sketches and yet I did not feel ready. Only many years have taught me that in such cases it is necessary to have patience to not have enough picture about the knee.

And only after about five months, it so happened that I was in the twilight, looking at the second big epodov and suddenly saw very clearly what is missing here – a white border.

I scarcely dared to believe it; nevertheless went to the store and ordered a canvas there. My thoughts about the size of the canvas lasted no more than half an hour.

I dealt with this white border as capriciously as she treated me: at the bottom left is a gap, a white wave grows from it, which suddenly falls, the talismo in order to circumnavigate the right side of the picture with lazy curls, forms the top of the lake, disappears to the upper left corner, where her last, decisive appearance takes place in the painting in the form of white teeth.

As the white border gave the decision, I named a picture in her honor.