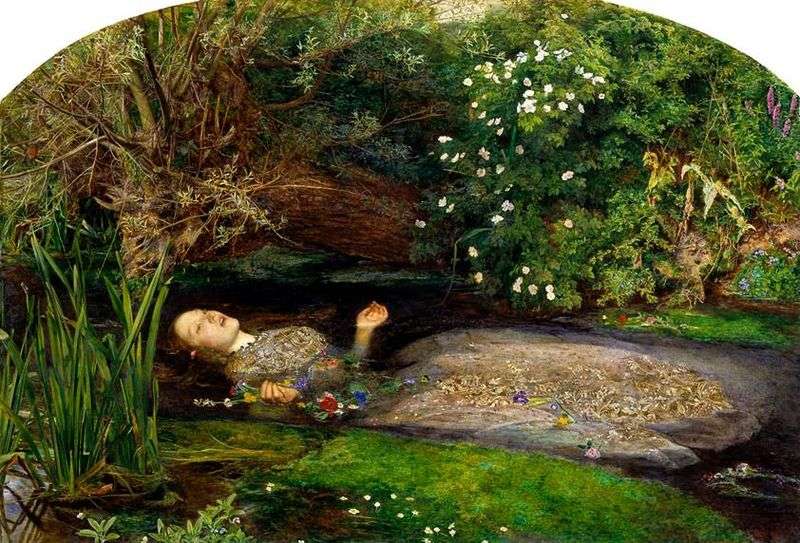 John Millais as a basis for his painting “Ophelia” took the story of “Hamlet”: she learned of his father’s death at the hands of her lover, killed herself. Here she is shown at the very moment when I fell in the river water. Her mouth is slightly open: she takes the sad songs.

She spread her arms to the side, eyes rests in the sky – because of that many correlate its position with the crucified Christ.

Ophelia slowly sinking into the depths of the waters among the sprawling magnificent colors of nature. At the same time on the girl’s face does not show fear or anxiety. It was as though she strive to leave as soon as possible with the life and is ready to face death.

The fame of this work by British artist brought the detail in the image of nature. Even painted plants act as specific characters: buttercups – it is ingratitude; willow that bent over the face of Ophelia – rejected love; nettle – pain; Chamomile also relates to the girl’s innocence.

Roses, floating on the water, has traditionally been a symbol of love; meadowsweet, which the artist has placed in the corner of the picture – it’s senselessness of the whole situation, the death of a young girl; me-nots, flooded the coast – loyalty; Scarlet Adonis, the passing hand, correlates with grief; above the drowned pansy dress – this unrequited love.

Ton used Millet in his picture, rich and very deep. Only the river is represented as a dark mass, like a swamp. She, like a shroud covers the Woman gently, plunging into its depths.

Of interest is how the artist painted his work. First, he created background: sitting on nature, landscape Millet painted clock. Then he was transported to the studio, where the special guest of models for a long time lying in a pose of Ophelia in the bathroom, bravely enduring the cold.