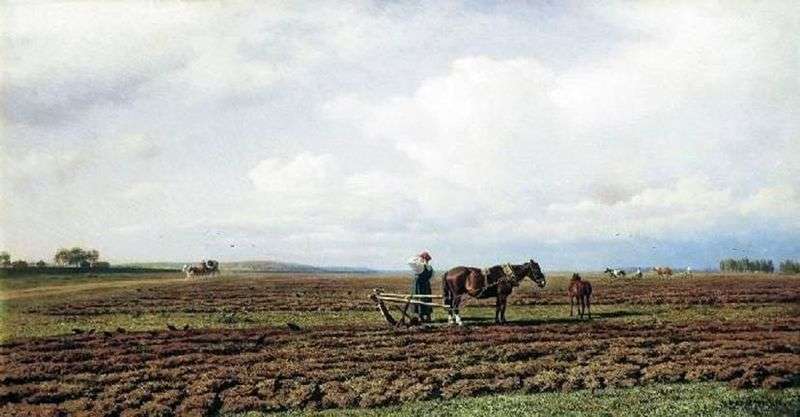 A real pearl of the landscape genre was the picture he created “On the plowland” – a painting that, along with “Rooks” AK Savrasov, became one of the picturesque symbols of Russia.

Here we see the same plain motif of the Cloddt – the sky, the earth, the hot summer afternoon, the peasant woman pulled away from the plowing for a moment to look at the brichka, rushing along the road. But in this unpretentious motif the artist rises to dizzying generalizations, to the symbol of an infinitely renewing life. The people, the land – that, according to Klodt, are the basis

and essence of Russian life.

The painting “On the Plow Field” occupies a central place in the artist’s work. And to this day this work is the most famous work of MK Klodt. The picture is replicated in tens of thousands of copies – postcards, reproductions, calendars… Three times MK Klodt repeated his painting: in 1873, 1879 and 1881, for Russian museums. And the original has been in the permanent exposition of the Tretyakov Gallery for more than 100 years. The painting, by the way, was bought by PM Tretyakov right from the exhibition. In a word, the painting “On the Plow Field” was the undoubted success of MK Klodt.