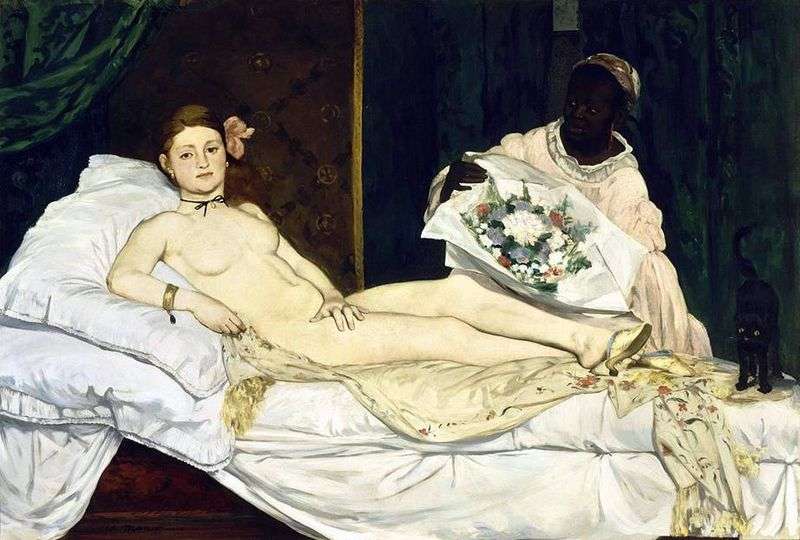 The canvas, created in 1863 by the French impressionist Edouard Manet, considered one of the masterpieces of modern painting. At the Paris Salon in 1865 the picture was the cause of one of the biggest scandals in the history of art. Today “Olympia” is located in the French state-owned.

The painting shows a reclining nude woman. Right hand it rests on a lush white cushion, upper body slightly raised. Her left hand rests on his hip, covering the bosom. The face and body of the model turned to the spectator.

In her crisp white bed coverlet thrown over creamy, richly decorated on the edge of a flower pattern. The tip of the covered girl holds the hand. The viewer is visible and dark red bed interior. The girl completely naked, on her a few jewelery: her red hair pulled back is decorated with a big pink orchid on the neck of her black velvet ribbon tied bow with a pearl. The pandan matched to the pearl earrings, and on the right hand model – a gold bracelet with a pendant. Feet girl decorate elegant shoes-pantalety.

The second character on the canvas Manet – dark-skinned maid. In her hands she holds a luxurious bouquet in white paper. Black woman wearing a pink dress, a bright contrast with her skin, and her head almost lost among the black background colors. At the foot of the bed sat a black kitten, serving as an important compositional point on the right side of the picture.

Spatial interior depth of the picture is virtually absent. The artist operates with only two planes: blond human figures – in the foreground and a dark interior – in the background.

The bright vertical stripe gold trim wall divides the dark background of the picture almost in half. This allows you to focus less left side, square “frame” on the head of Olympia, and a large, rectangular – the figure of her maid. Part of the wall of the torso Olympia in dark brown wallpaper and green drapery creates a focus on red hair model. The entire interior of the room behind black woman almost completely hide the green curtains, a small breakthrough in the next plan of the painting forms the doorway.

The color scheme of the picture differs restraint: in the palette of the artist a few basic colors: white, black, blue , and from the warm – brown and gold and red. Prevailing in the picture bright beige tones used for the skin model and her bed, in contrast with the dark, almost black tones situation, images of maids and a cat whose contours almost melts on the curtain background. This strong contrast divides the canvas in half horizontally.

The artist puts a few flaming accents: the rich color of an orchid in her hair and pick up the bouquet buds floral bedspreads. Rhythm support red scarf on the head maid and the bed padding. Dark green curtain tune with the tone of the leaves and stems in a bouquet, trim covers, greenish shadows on the sheets and piping pantalet.

At the heart of the picture composition is necessary repetition of triangular shape. Dark red triangle upholstery bed in the lower left corner in common with a clear protruding cushion above area. The same geometric shape and forms a green drape over them.

Figure of woman in pink right as inscribed in a triangle. The compositional center of the picture is the womb of Olympia that is emphasized by its line construction: girl to the heart are the diagonal line of the shoulders and the hands of both women, it is directed vertically golden wallpaper line and legs are crossed the line Olympia.

Brushwork of Manet seems very flat. Master refused the traditional layering and thoroughness of the application of smears. The paint in some places beyond the boundaries of objects depicted, for example, a bouquet of virtually divided into separate color spots. In the picture there is the emergence of a new style – Impressionism, one of the founders of which was its author.