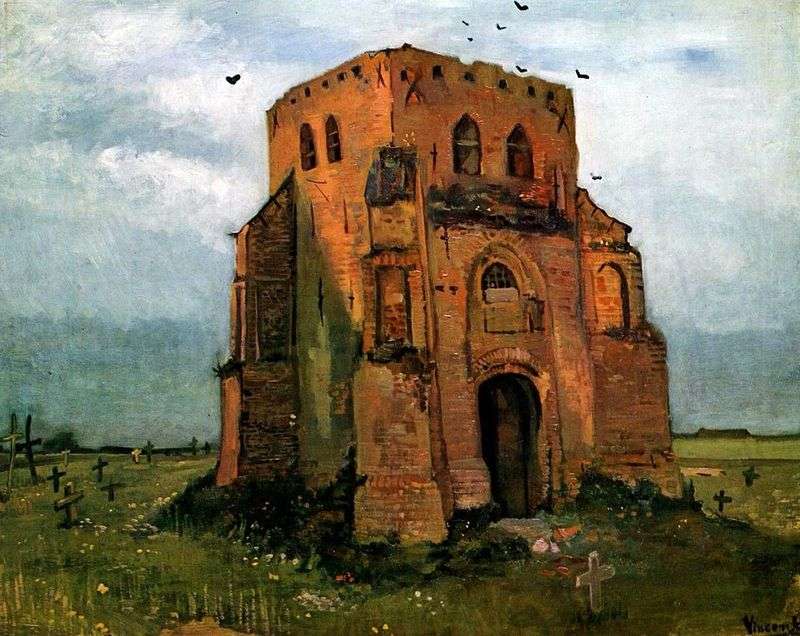 The painting “The Old Church Tower in Nyuan” is one of the first serious works of Van Gogh. The artist created it in 1885 in the city of Nyuen, and, as in the case of the picture “Consumers of potatoes”, its writing was preceded by a long period of preparation. With the help of this landscape, Van Gogh hoped to receive the recognition of the Parisian public by exposing the canvas in the art salons of the capital.

The old church tower depicted in the painting, in the days of Van Gogh was already abandoned long ago, and it was going to be demolished, which was the impetus for the creation

of the picture. But in the cemetery, located near the former church, the peasants were still buried. In his painting, Van Gogh wanted to convey the idea that religion is gradually losing its relevance in everyday life, while the life of ordinary people is on its own.

The picture is written in a realistic vein, only a small curvature of lines and the strengthening of contours indicate the author’s style of Van Gogh. The color scheme is based on a combination of dark, soft colors. Stormy lilac clouds hang over a huge space, strewn with cemetery crosses. Van Gogh very greatly understated the horizon to show the greatness of the church, which remains so even despite the process of gradual destruction.