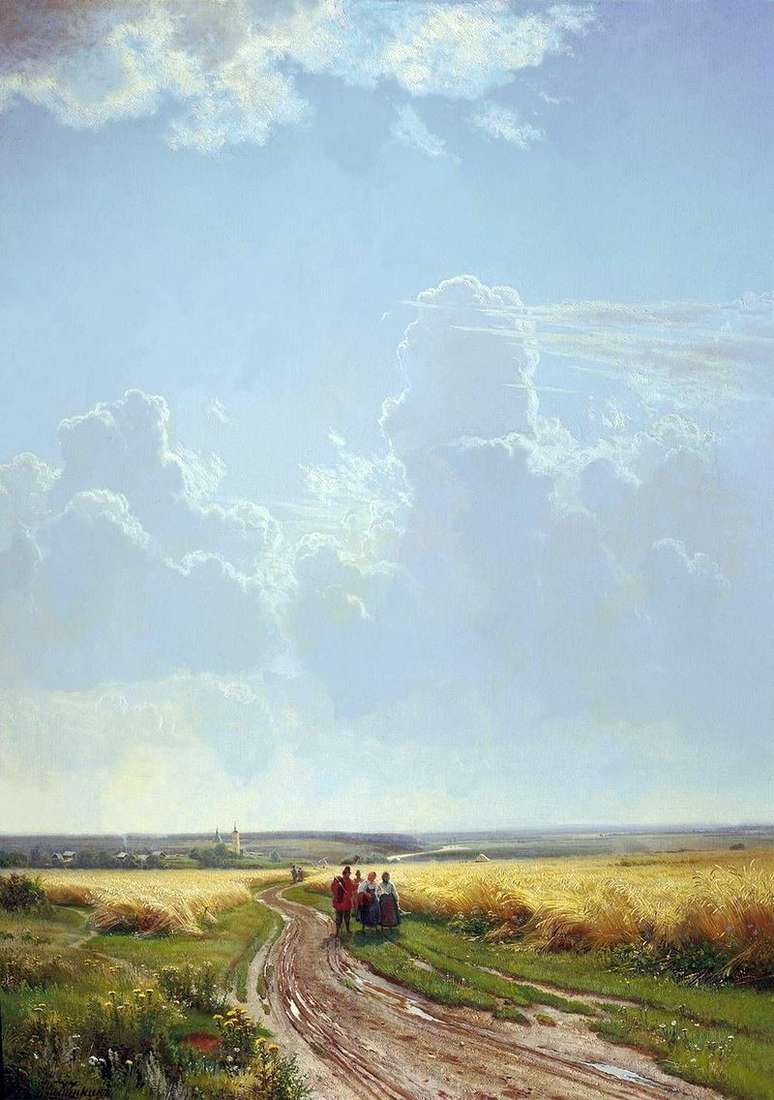 In the history of Russian art, this picture is bypassed by the attention of researchers, and yet it has become a landmark in the history of Russian landscape. It is necessary to recall the time of its creation – 1869 year. The Savrasov masterpiece “The Rooks Have Arrived”, created two years later, has not yet appeared. Only Fyodor Vasilyev began to write his first etudes, his modest landscapes of this time were, rather, a promise for the future.

Kuindzhi’s works, which the public drew attention to, appeared… From V. Manin’s monograph As usual, the pictures of I. I. Shishkin depict a specifically accurate landscape. The canvas is filled with light, air, vast expanse – what the famous landscape painter loved so much and was able to paint so picturesquely. The artist succeeded in incorporating in his picture the generally accepted idea of the Russian landscape: a field, a sloping hill, a quiet river, a curve, a broken country road, poor huts, a village church with a bell tower. The unsophisticated neighborhood of Bratsevo village has become a fertile place for the embodiment of the finished image of Russian nature and the Russian land.

Meanwhile, the landscape is not typical for the work of I. I. Shishkin. Most of his work is devoted to the forest. The sky was not an object of the artist’s close attention: in its landscapes it is mostly neutral. And here it is huge, immense and takes up most of the composition. And Ivan Shishkin wrote it beautifully, filling it with silvery ash clouds, through which the sunlight shines through, which, perhaps, brings joy and hope for good. It was the sky, the pure and the great, that became the main object of the image in the “Polda”.

And another thing, I. I. Shishkin, a born landscape painter, never wrote either people or animals. His nature is self-sufficient and does not need the presence of a person. And on this canvas between ripe rye on a rain-washed road go peasants with rakes. Above one of the huts is rising smoke. Live and obvious signs of a man-made nature. In the whole picture, one sees peace, the stability of rural life with a recurring cycle of seasons and labor.

In its pictorial features, the painting “Noon” occupies a special place in the artist’s work, being one of his best works. The painting was the first one Pavel Tretyakov acquired for his gallery. It turned out to be a turning point in the fate of the 39-year-old artist: success and public recognition came to him. P. Tretyakov himself subsequently at any Mobile exhibition necessarily bought at least one Shishkin landscape.