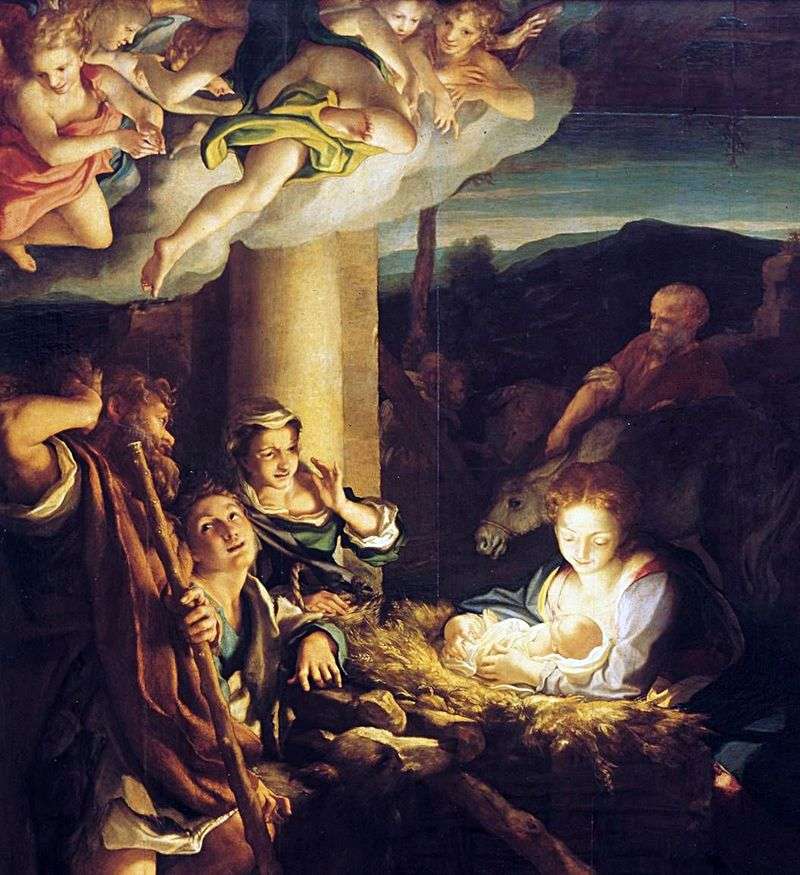 Correggio loved the light for his own sake and was rewarded for his love, because it was the art of transmitting light that elevated him above all modern masters. He was able to express the mysterious silence and gentle coolness of early morning and late evening hours as well as others.

The great dignity inherent in his works and in which he did not have rivals remains a fascinating light that permeates in the very shadows and makes them transparent. This art of chiaroscuro, together with an inimitable ability to convey the sensual charm of a young life, gave Correggio a place in a small number of luminaries of the first magnitude on the horizon of Italian art. Nobody could surpass Correggio and in the understanding of light contrasts, as we see it in the large altar image of “The Worship of the Shepherds”, called “Night”. Just at the time when Maria, Joseph’s wife, was about to give birth, “it was the command of Caesar Augustus to make a census across the land.” And they all went to register, each in his own city.

Joseph also went from Galilee, from the city of Nazareth, to Judea, to the city of David, called Bethlehem, because he was from the house and family of David, to make an appointment with Mary, betrothed to him by his wife, who was pregnant. When they were there, it was time to give birth to Her, and she gave birth to the Son of her Firstborn, and wrapped Him in swaddling clothes, and put Him in a nursery, because there was no room for them in the hotel. In that country there were shepherds on the field. Suddenly the angel of the Lord appeared to them and said: I announce to you the great joy that will be to all people, for today the Savior, who is Christ the Lord, was born; and here is a sign to you: you will find the Infant in swaddling clothes lying in a manger. And the shepherds, hastening, came and found Mary and Joseph, and the Infant lying in the manger. Seeing the same, told others about the Infant Samm. “” Nativity “is Correggio’s most famous work,

Ordered in October 1522 and finished at the end of the decade, this composition is the first in European painting a monumental work depicting the night scene and at the same time an ideal pair for another picture of Correggio, also created for the private chapel a few years earlier – “The Madonna with Saint Jerome” more often called the “Day”. The dazzling light comes from the divine Infant lying on the coarse bed. The light is melting on Maria’s face, with her mother’s tenderness embracing her son. Everything that happens around is built on a game of gestures – the shepherds, reverently bowed at the sight of a miracle, St. Joseph, who draws a leaning donkey, angels appearing on a cloud that slowly floats into a picture, starting to fill its space with eyes.

Moonlight, muffling the tonality of the colorful scale, does not deprive the color of a certain sonority, but deep and contrastive chiaroscience mysteriously increases, rounds the forms, snatching out individual figures from the darkness of the night and smoothing the glossy leaves of the bush in the foreground. “Christmas” – one of the very first “night scenes” in Italian art. It was preceded only by Raphael’s fresco, “The Emancipation of the Apostle Peter from the Dungeon,” where the element of the miracle was emphasized, while Correggio, with the help of a magnificent possession of the cut-off effects, creates the illusion of real night illumination. It was in connection with “Night” that Stendhal wrote about the “special radiance of Correggio’s paintings.”