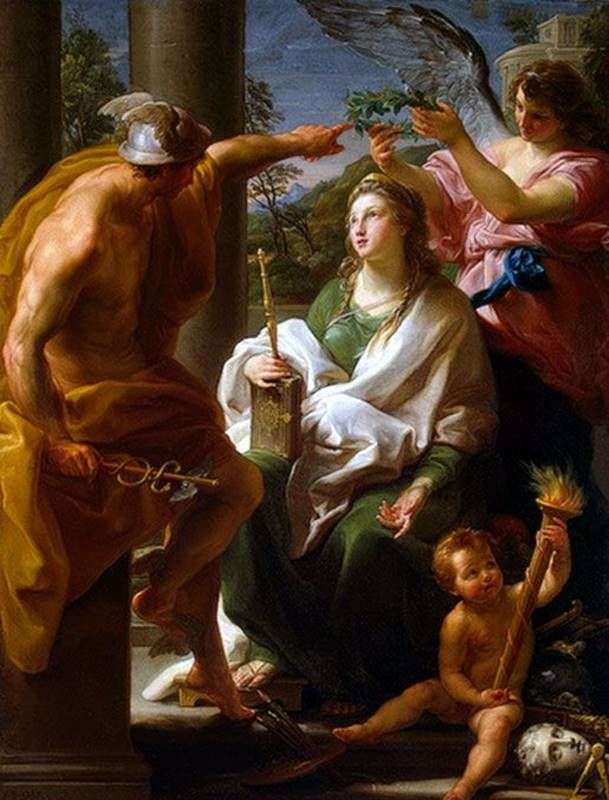 Painting of the Italian painter Pompeo Batoni “Mercury, crowning Philosophy, Mother of the Arts.” The size of the picture is 118 x 87.5 cm, canvas, oil. Painting by artist Pompeo Batoni is a steam room to the painting “Voluptuousness”. Mercury, in Roman mythology was originally a god of commerce, the patron of travelers. Usually depicted with a purse. Later, he was identified with Hermes and became more often depicted in winged sandals, a road hat and with a baton in his hand. His functions also became more complicated: he began to be considered a guide in the realm of the dead, a messenger and servant of the gods, a patron of arts and crafts, secret knowledge, magic and astrology.

In the western provinces of the Roman Empire, he was often identified with Celtic Meadow. Philosophy, a form of social consciousness, world outlook, a system of ideas, views on the world and the place in it of man; explores cognitive, socio-political, value, ethical and aesthetic attitude of man to the world. Historically established main sections of philosophy: ontology, gnoseology, logic, ethics, aesthetics.

In the solution of various philosophical problems, opposing directions such as dialectics and metaphysics, rationalism and empiricism, materialism and idealism, naturalism and spiritualism, determinism and indeterminism, etc., stood out.

The main trends of modern philosophy are connected with understanding of such fundamental problems as the world and place in it of man, the fate of modern human civilization, the diversity and unity of culture, the nature of human cognition, being and language.