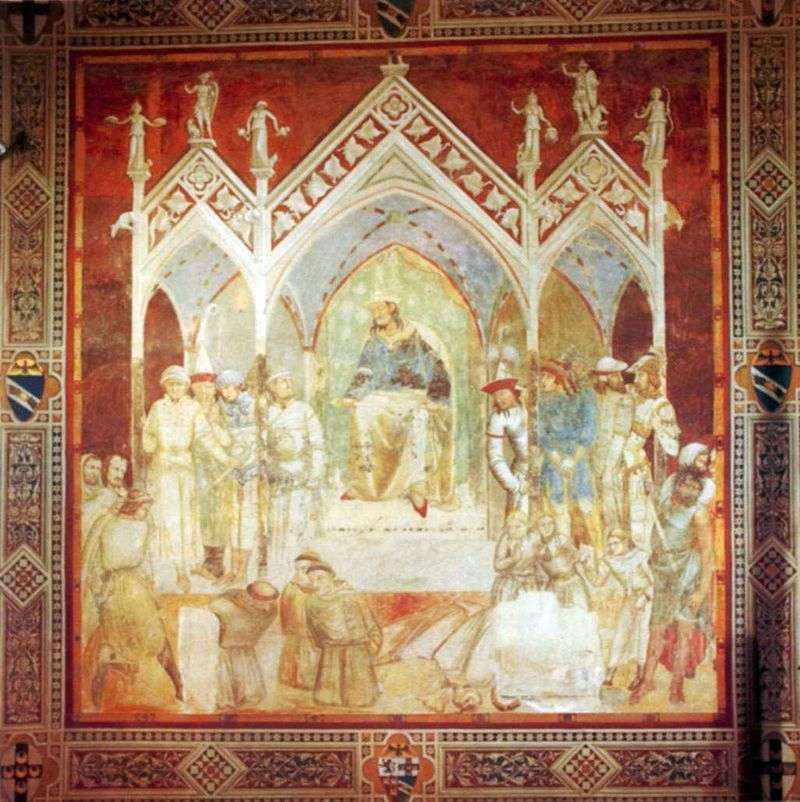 This fresco decorated the hall of the headquarters of the Siena Franciscan monastery, which in 1324-1327. painted by the brothers Lorenzetti. This huge picture is dedicated to the memory of seven Franciscan monks, who were executed in 1277 in the Moroccan city of Ceuta by order of the Sultan. In the center of the composition is depicted a cruel sultan on the throne, he closely watches the execution, violently clutching the scepter lying on his knees.

Standing on both sides of the throne, the Sultan’s confidants are engulfed in fear, curiosity and sympathy. Expressive facial expressions of oriental faces and gestures are emphasized by the picturesqueness of exotic clothes. The executioner on the right has just accomplished his bloody work, which even excited him: having turned away, he sheathed his sword. Another executioner is depicted with his back to the viewer, waving his sword, he is going to demolish the heads of three bound monks. Curious onlookers are depicted by small figures behind the executed.

Ambrogio was able to designate the depth of space by the placement of human figures, which can be clearly seen in this picture. The gables of the marble throne room are decorated with imitating antique sculptures symbolic images of the seven deadly sins. All actors are characterized by passion and tension, in which the influence of the works of Giovanni Pisano affects. At the same time, the image of the space and compositional structure suggests that Ambrogio studied the Florentine frescoes of Giotto in the church of Santa Croce.

The image of oriental faces and robes speaks of direct observations, as well as acquaintance with Persian miniatures and illustrated astrological manuscripts, which in Italy in the XIV century. it was no less than the Eastern people themselves.