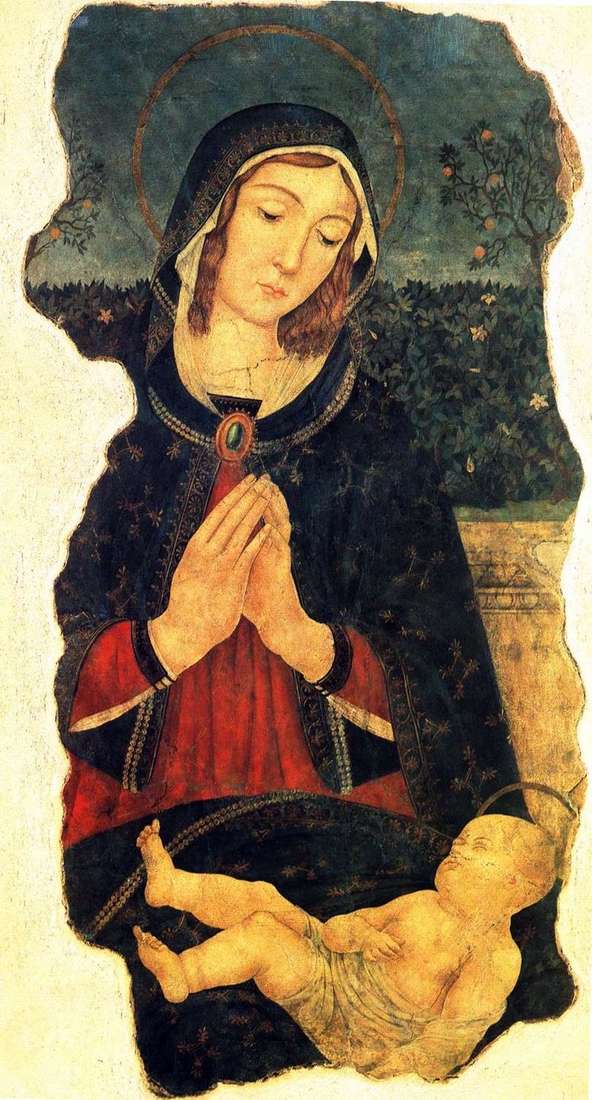 The previous owners of this picture also appeared as a masterpiece of the Umbrian school. Where she was originally, is unknown, but we can reconstruct her complete composition. Help for this is one of the frescoes of Antonio da Viterbo, Jr., otherwise Pastura, the central part of which completely coincides with our fragment. Based on this, it can be assumed that two angels were depicted on either side of Mary, while Mary herself was depicted sitting.

The sleeping infant makes us remember the impending death of Christ on the cross, the composition of the picture seems to project into the future the image of Mary holding the body of Christ in her arms. The complete coincidence of Roman and Budapest paintings suggests that most likely they are both written in the same preliminary sketch. Thus, the time and place of the creation of the Budapest picture can be determined.

Since Pastura’s painting, as documented by documents, was written in Rome between 1490 and 1494, the Budapest picture also refers to this period and, obviously, was created in Rome. With complete coincidence, these frescoes differ significantly in style, and this excludes the possibility that they were written by one artist. The characteristic type of face, the important role of the contour, is more characteristic of the Umbrian school, but a subtle combination of these elements with plastic solutions suggests the influence of Florentine masters. The same characteristic features of the depictive manner can be found in the works of the artist, whose work was first reconstructed by R. Longi.

The real name of this artist is not known, and it is customary to call the Master of Gardner’s Annunciation one of his works, kept in the Isabella Museum Stewart Gardner. Budapest fresco can be attributed to the works of this master. Previously, his main work was attributed to Pinturicchio and Fiorenzo di Lorenzo. And the Master of Gardner’s Annunciation was trying to identify himself with two artists who worked for a long time and in the corresponding period working in Rome; in their work the features of the Umbrian school are noticeable. VR Valentiner identified the author of the fresco with Antoniozzo Romano, and F. Ceri, whose hypothesis seems more convincing, with Piermatteo da Amelia.

The well-known data on the life of Pierrematheau give an explanation of the peculiarities of his work. He often visited Rome, worked there for a long time, but he worked in Citta di Castello, in Amelia, and in Spoleto, where he was the apprentice of Fra Filipe Lipni. So the Florentine elements in his work can be explained by the influence of Fra Filipe. The works that served the definition of the master’s name are kept in the museums of Berlin, Altenburg, Boston and Philadelphia.