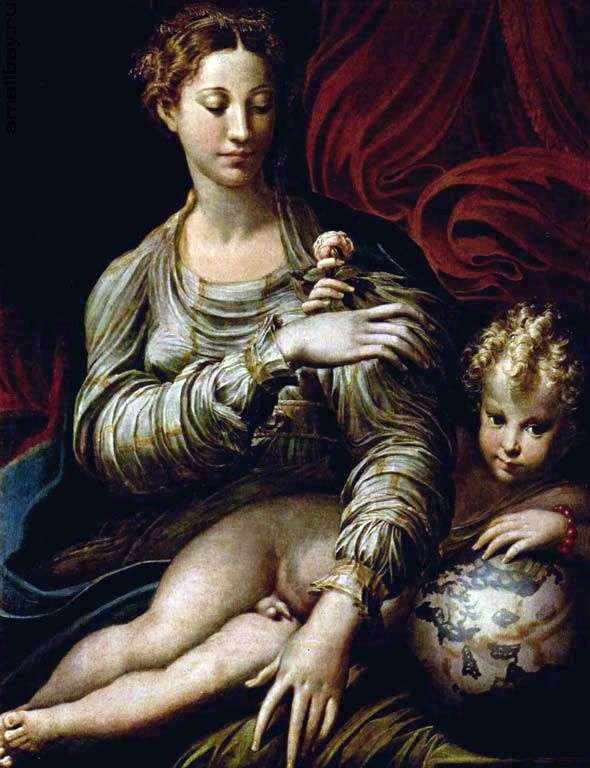 Parmigianino’s painting “Madonna with a Rose”. The size of the picture is 109 x 88.5 cm, wood, oil. The aesthetic ideal of Parmigianino, the formation of which can be traced in a number of his works of the 1520s. Subordinated to the desire to oppose the reality of the world of refined-aristocratic, fragile, almost ethereal beauty, he has an abstract character and very soon reveals the narrowness of the master’s ideological positions. Such is his “Madonna with a Rose”, which is one of the most striking and characteristic works of Mannerism.

The images of this spectacular,

masterly constructed composition are exquisite, deliberately secular in nature and at the same time devoid of not only significance, but also human warmth, marked by internal flaws.

In the Madonna, Parmigianino emphasizes cold estrangement, aristocratic inaccessibility, giving her beautiful face an arrogant, almost harsh expression, and a gesture of thin, sleek hands – mannerism, deliberate aimlessness. The ambiguity of views, the flirtatious bend of the body, emphasizing the roundness of the hips, give an imprint of cold sensuality to the image of the little Christ. The principles of the visual language of the master of Mannerism, who acquires special refinement in the Madonna with the Rose, are designed to emphasize the ideality of these images and their non-participation in the real world.

The coloring of the picture, built on an exquisite combination of cold smoky-lilac, pale pink, blue-green, faint-red tones, not only emphasizes the aristocracy of images, but also deprives them of fullness, material persuasiveness: the body of Christ, the face and hands of the Madonna painted in in a smooth generalized manner, a pale pink tone with light bluish and mauve shades that seem almost porcelain.