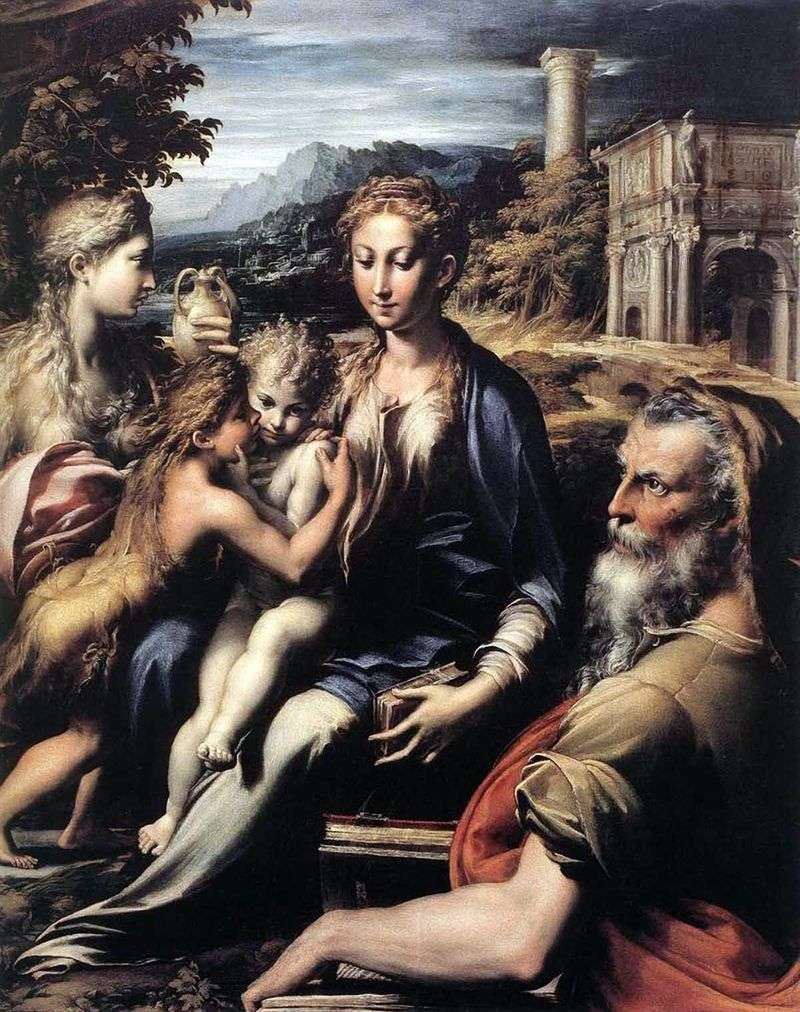 Parmigianino’s painting “Madonna on the Throne, Zechariah, John the Baptist, and Mary Magdalene.” The size of the picture is 73 x 60 cm, wood, oil. Early glory did not spoil the young artist. He diligently studied the works of great masters, was, as his contemporaries recall, refined and pleasant to handle.

And he worked extremely hard. During the works of Parmigianino, he did not notice at all that Rome was occupied by the troops of Charles V of Habsburg. There is a legend that the artist did not even distract from his next painting, when German soldiers broke into his house. According to Vasari, the soldiers were so impressed with his work that they did not dare to cause him any evil. According to Vasari, the Germans who defended Parmigianino for the sake of his excellent talent were replaced by others who are less sensitive to the fine arts.

One day, when the artist was heading towards one of his friends, he was captured by the soldiers, and he had to give them a few scanto he had, so that they would let him go without harming him. Vasari reports that this circumstance was not so much the painter himself upset as his uncle, who decided to send him away from sin away to his homeland. Parmigianino, however, did not go to Parma, but to Bologna, where he lived for a long time in the house of one of his friends, who earned a living by making saddles.

In Bologna, the artist worked a lot on drawings and engravings. For the manufacture of the latter he had with him a certain master Antonio from Trento. One fine morning this master, while Parmigianino was still asleep, stole from his chest all the engravings on copper and on the tree, as well as all the drawings, and disappeared with them in an unknown direction. The engravings, however, were soon found – Antonio left them with someone of his acquaintances. The drawings disappeared without a trace. But every cloud has a silver lining: in despair that all his “graphic works” went to pieces, Parmigianino again turned to painting.

All work is written by the artist in gray-blue tones, giving the biblical story a shade of ephemerality, some non-participation in the surrounding world. Discharged with subtle grace, the faces of the Mother of God and Mary Magdalene are devoid of materiality and human warmth, but the face of the prophet is spiritual and significant.