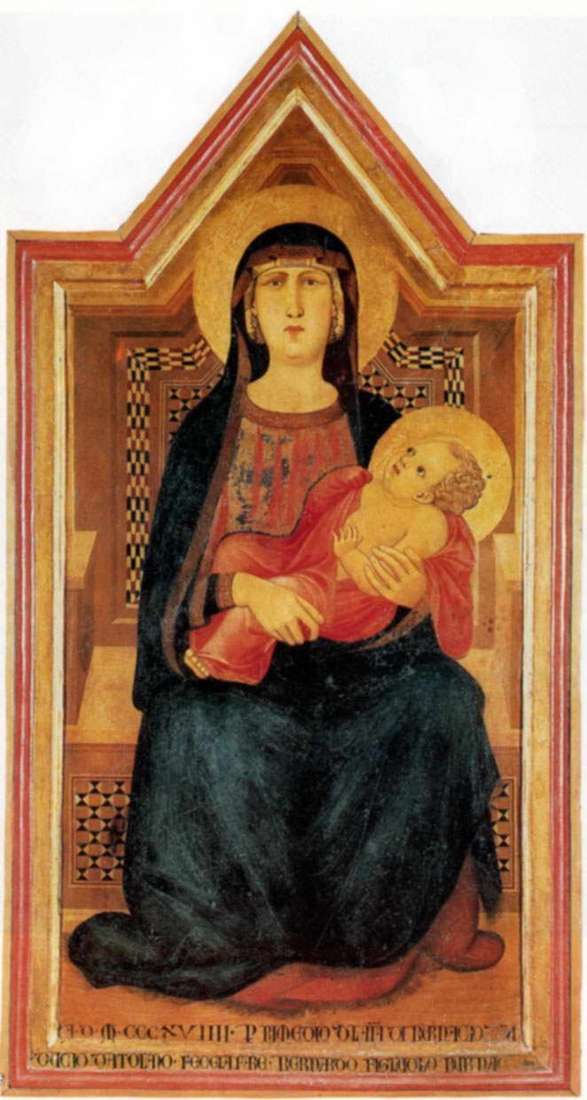 In 1922, this painting was discovered in the church of Sant’Angelo in the village of Vico l’Abate near Florence. It recognized the earliest known works of Ambrogio Lorenzetti. The picture depicts the Madonna, majestically and motionlessly seated on an inlaid wooden throne and with both hands holding a very mobile baby.

This contradiction is reflected in colors and lines. Great is the contrast between the pyramidal, frozen figure of the Madonna, the cold blue of her cloak and the dynamic outlines of the fiery red diaper, emphasizing the full-blooded liveliness of the infant. The majestic figure of the Madonna as if moves apart the space of the picture; This effect is enhanced by the fact that the contours of the throne coincide with the boundaries of the picture.

Reminding little Hercules, the baby is tense in the arms of the mother. The diagonal placement of his figure breaks the composition of the picture, built on the geometric balance of verticals and contour lines. The illusion of space, created with the help of colors and light and shade, also conflicts with the frontality of the Madonna. All these contradictions Ambrogio Lorenzetti encloses in a previously unknown condensed strict composition, creating an amazing harmony with an amazing artistic flair. This is an early work of the master, and as if the components of his mastery are clearly demonstrated.

The formation of his style, along with Byzantine art, was influenced by the plasticity of the Siena reliefs of ducento and the dynamism of Giovanni Nizano. The condition of the painting is good, only a few colors of Madonna’s clothes have been erased – the blue color was updated during the restoration in 1936. The gold-red-plastic frame formed on the pattern customary for ducento painting. At the bottom of the picture, a somewhat erased inscription reads: ADM CCCXVII. D / EL / A / N / I / M wrote Bourne, son of Bernardo…]