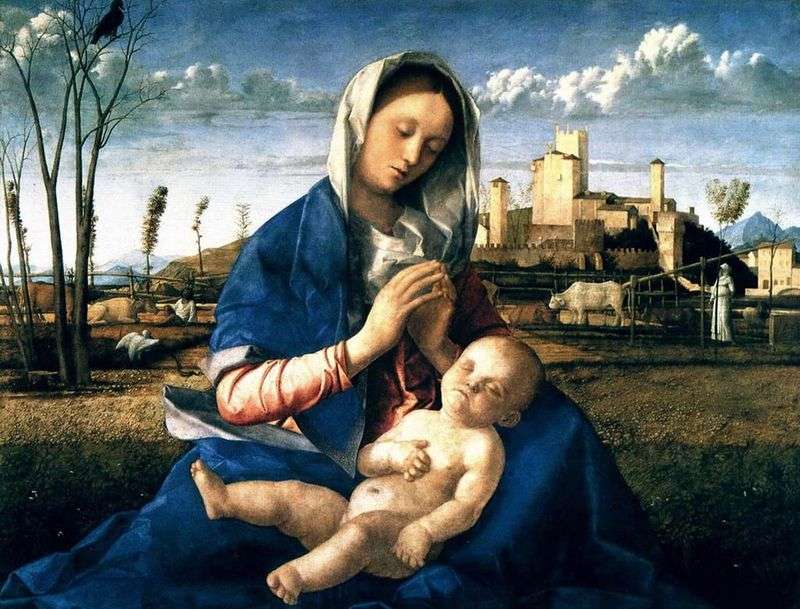 In the center of the composition is the image of a young Mary sitting on a meadow, on whose knees a sleeping naked baby is kneeling. Charming is her pensive face, beautiful folded in a prayerful gesture hands. The figure of the divine baby seems sculptured, which reminds of a close acquaintance of the master with the work of Mantegna.

However, the softness of chiaroscuro and the general saturation of the color scale suggest that Bellini found his way in painting. Beautifully painted in the background, the landscape is endowed with obvious symbolism. The painting is executed in mixed technique, which allowed

the artist to make the contours softer, and colors more saturated.

We do not know anything about the history of writing this picture, nor about what happened to it until 1858, when it was first discovered. From time to time, there are art critics trying to challenge the authorship of Bellini, but these attempts are always untenable. The picture is unusual in its horizontal format. Typically, the painters portrayed the Madonna and the Child on the canvases of the vertical format. In addition, it is not typical for Bellini and the pose of the Mother of God sitting on the ground. Most often, the artist wrote to Madonna either on the waist, or on the throne.

The posture of the sleeping Infant Christ anticipates the pose in which the body lying on the knees of His Mother lies, the body taken from the cross. The space of the picture is filled with symbolic details that infuse sadness and anxiety into the soul of the viewer. The very landscape seems to be enveloped in a sad haze. At the same time, it is bright, penetrated by the sun’s rays. The English art critic Kenneth Clarke wrote about this painting in his book “Landscape in Painting”: “Bellini depicts a cold but sunny day, which happens in the very beginning of spring, when the snow is barely coming down…

Soft light floods the houses and towers of the city, but the stony ground in the foreground is in the shade and breathes cold. Thanks to the chosen lighting, the artist gets the opportunity to depict the figures in such a way that they seem to be carved from marble by antique statues. “