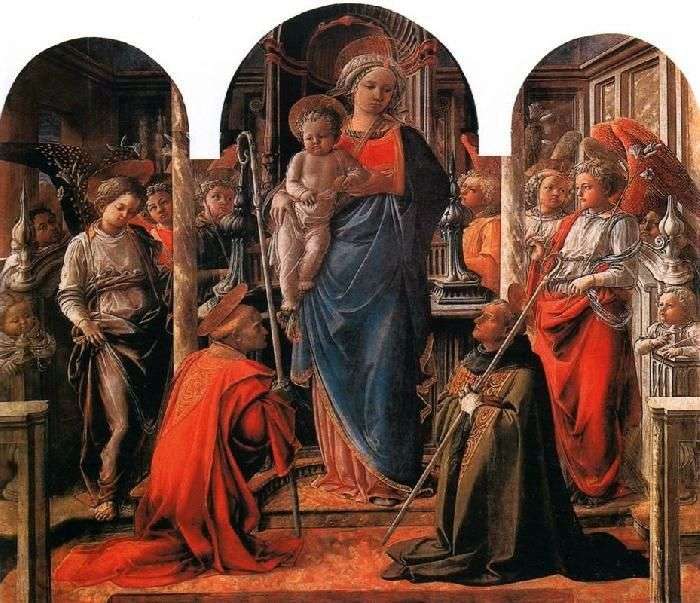 In the mature years of creativity, Lippi wrote polyptychs for the altar of the Barbadori Chapel in the Church of the Holy Spirit in Florence. In this work, he managed to combine the sublime, almost sculptural forms of Masaccio with the true vitality of figures and objects.

For the altar, they chose the form of a polyptych, because it exactly corresponded to the tasks of a single action and a single space. The columns in the Lippi picture do not coincide a bit with dividing it into three parts, which creates the illusion of expanding space. Angels, unconstrainedly positioned around the stately Madonna and the large, but seemingly weightless, Infant Christ, whom she only slightly supports near her thigh, look in different directions.

The Mother of God moves freely, rising from the throne towards two kneeling and concentrated saints. The demonstration of underlined piety, characteristic of earlier altars, is clearly not the main task of the image. This holy gathering is already close to turning into a holy discourse, which later became the norm of the art of the Renaissance.

Cool tones restrain the overall color of the picture. But on this background brighter, warm notes are distinctly sounding. Red color spots together with golden light are reflected in the folds of clothes, in shades of faces and hands. They bring freshness to the space of the image, creating a sense of fullness and richness of the painting. Madonna Filippo Lippi from the altar Barbadori came to the Louvre in 1814 as part of a collection of paintings of the early Renaissance, taken out by Baron Vivan-Denon from Tuscany.