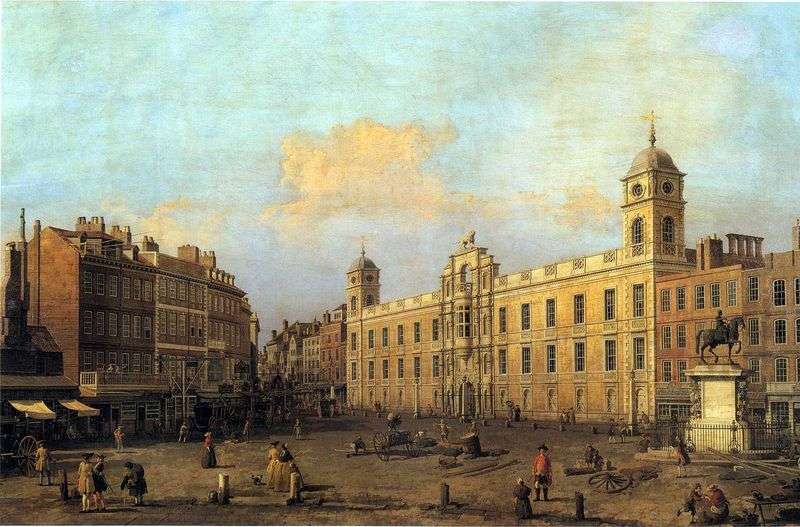 Northumberland House is a large Jacobin mansion in London, which was named so, mainly because of its history. He represented the London residence of the Percy family, who were counts, and later the Dukes of Northumberland and one of the richest and most famous aristocratic dynasties of England for many centuries. Approximately from 1605 until the demolition in 1874, it was far to the west of Strand Street. In later years he towered over Trafalgar Square.

In the 16th century, the Strand, which connected the City with Westminster, housed the mansions of some of England’s richest prelates and aristocrats. Most of the largest houses were on the south side of the street and had gardens that stretched to the Thames. In 1605, Henry Howard, 1st Earl of Northampton cleared the place at Charing Cross and built himself a mansion that was originally known as North Temple House. The facade facing the Strand was 162 feet wide, and the depth of the house was slightly larger. He had one central courtyard and turrets in every corner.

The layout reflected medieval traditions with a grand hall as the main room and separate apartments for family members, which at that time still included servants. Most of the apartments stretched from outside doors in the courtyard, in the order presented at the universities of Oxbridge. The exterior was decorated with a classic ornament in a free manner of ambitious Jacobin buildings. The most striking external feature was the carefully designed four-story gates from the hewn stone that emerged on the Strand. The garden was 160 feet wide and over 300 feet in length, but unlike neighboring mansions in the east, it did not reach the river closely.

The house passed from Lord Northampton to the Earl of Suffolk, who belonged to another branch of the mighty Howard family led by the Dukes of Norfolk. In the 1640s, the building was sold to Count Northumberland at a reduced price of £ 15,000 as part of a marriage contract when he married a representative of the Howard family.

Regular restructuring took place over the next two centuries, in response to changes in fashion, and to make the layout more comfortable for the lifestyle of that time. From 1657 to 1660 John Webb worked on changing the location of the family’s living quarters from the Strand facade to the facade of the garden. In the 1740s and 1750s the Strand facade underwent considerable reconstruction, two wings were added, which protruded from the ends of the garden facade at right angles. They occupied more than 100 feet in length and housed a banquet room and an art gallery, the latter was 106 feet long.

The style of the new interiors was related to the late Palladianism, and the architects were Daniel Garrett, until his death in 1753, and then the more famous James Payne. In the mid-1760s, Robert Myln used a stone for a new interior decoration, and perhaps it was he who was also responsible for the extension to the two garden wings that were built at that time. In the 1770s, Robert Adam was commissioned to renovate the front rooms from the garden. The glass room in Northumberland House was one of its most celebrated interiors. Part of the facade from Strand had to be rebuilt after the fire in 1780.

In 1819, Thomas Kandai reconstructed the facade of the garden five feet to the south, as the wall was unstable, and in 1824 added a new front staircase. By the middle of the XIX century, all the other mansions on the Strand were demolished. This area was no longer a fashionable place to live, but mostly commercial. However, the duke of Northumberland of that time did not want to leave the house of his ancestors, despite the pressure from the City Construction Administration, which wanted to build a road through this site by connecting it with new roads along the quay. After the fire, which caused considerable damage, the duke eventually accepted an offer of 500,000 pounds sterling in 1866. Northumberland House was demolished, and in its place built Northumberland Avenue.

One of the largest buildings on Northumberland Avenue was the Victoria Hotel with 500 rooms. During the Second World War, the government used it as the Ministry of Defense and renamed Northumberland House. This “new” Northumberland House was empty for several years until it was acquired by the Welcome Trust, which also owned the Club Quarters hotel network. Currently this building houses: Club Quarters hotel, 8 Northumberland Events, London School of Economics, Bianco restaurant and Boyds Bar. The London School of Economics leases part of the building from the Welcome Trust as a student hostel. The building is open to students during the school year, and during the summer holidays the rooms are given to tourists.