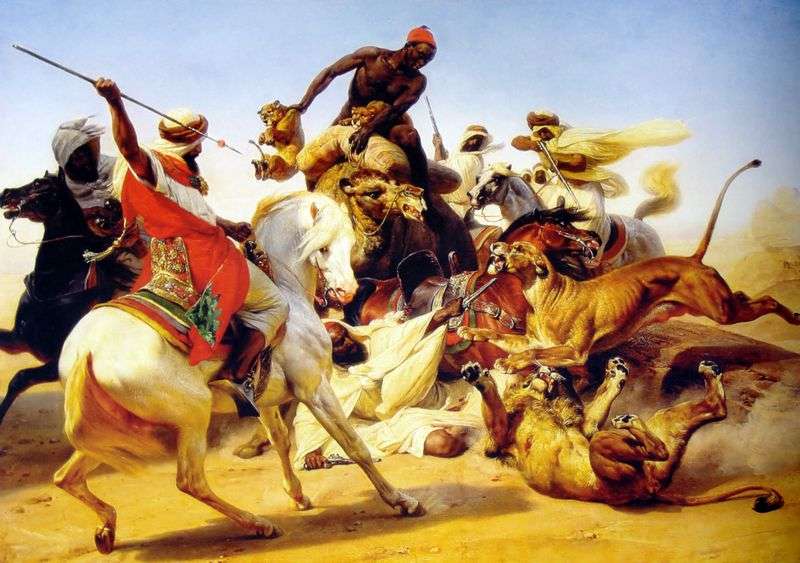 The main occupations of our distant ancestors, undoubtedly, were fishing, hunting and gathering. Over the course of the century, the passion for hunting has not disappeared anywhere. In some epochs this occupation was considered purely aristocratic, in others – on the contrary, the lot of commoners. Recall that among the host of Olympic gods and goddesses was Artemis, the patroness of hunters and herself a great hunter.

Artists of modern times simply could not resist the temptation to paint hunting. After all, it reveals to the bottom all that is in people – a readiness for self-sacrifice, valor and courage, or, on the contrary, cowardice and cowardice.

Austrian artist Rudolf Ernst depicted the hunt for a lion. “The King of Beasts,” recall, comes from the breed of felines, but meeting with such a cat does not promise a man anything good. Here we are witnessing a deadly battle. Several mounted horses with peaks, two lions, one of which managed to steal the hapless hunter from the horse and now furiously throws himself at him. Hunting, judging by the robes, the Arabs.

Together with them – the Moor, sitting on a camel and holding in one hand a small lion cub. That’s why, to know, adult lions are so desperately and hopelessly fighting with those who took their child from them.