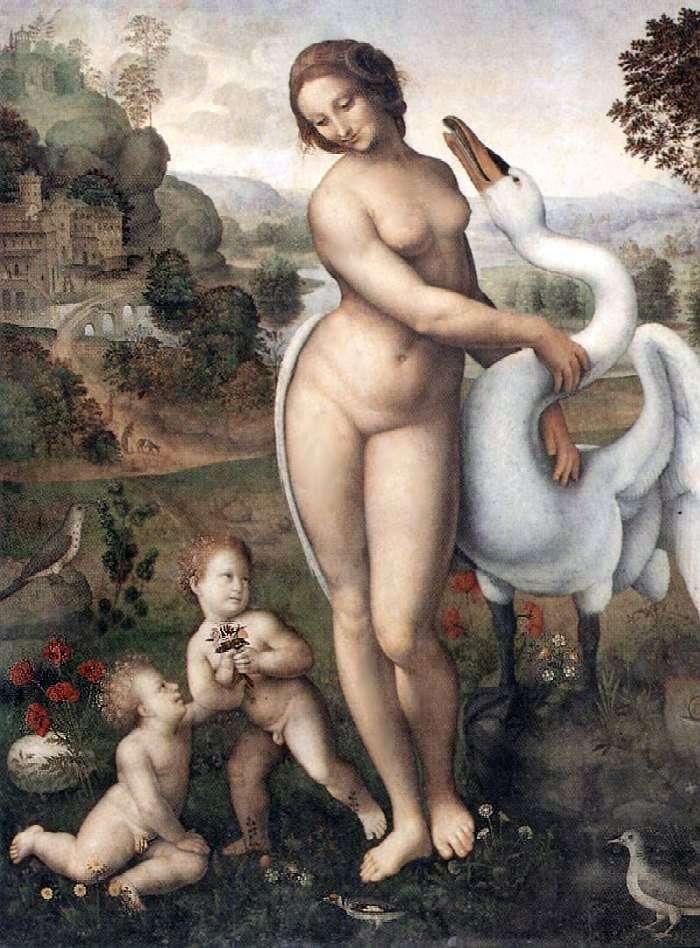 Written sources say that the original picture is lost. However, the sketches of Leonardo da Vinci and many copies have been preserved. This famous painting for three hundred years was considered a copy, the work of an unknown artist of the XIVth century of the Sienese school. Recent investigators of the will think that this may be an unfinished version that was in the house of Leonardo at his death, and bequeathed to his disciple, Salai.

X-ray showed that under the figures of two children, there are images of four children of Leda. Leda, in a graceful bending posture, Her hair out of braid, the spacious river landscape was most likely designed by Leonardo, but was performed by his disciples or later by other artists. The Greek myth tells of Leda, the wife of the Spartan king Tyndareus, from whom she had the daughters of Clytemnestra, Timandra, Filonoa and Castor’s son. captivated by the beauty of Leda, Jupiter fell in love with her. He sailed to her along the river in the image of a swan, when she bathed in the river Evrot.

As a result of this alliance, she laid one or two eggs out of which the celestial twins Castor and Pollux, Elena of Troy and Clytemnestra hatched. Leda stands tall, her arms around the swan’s neck, but at the same time she looks away chastely. The bird embraces her body with one wing and extends her neck to her face. On the ground just hatched eggs.

The appearance of the female nude body, its pose and the striking plasticity of its rounded forms, remind of the classical statues of Venus and, therefore, of love. And on the sketches of Leonardo, and in copies, eroticism is emphasized by numerous reeds. When ripening seeds are scattered far and on the ground, and in water, and reeds actively grow. It is a symbol of reproduction in nature.