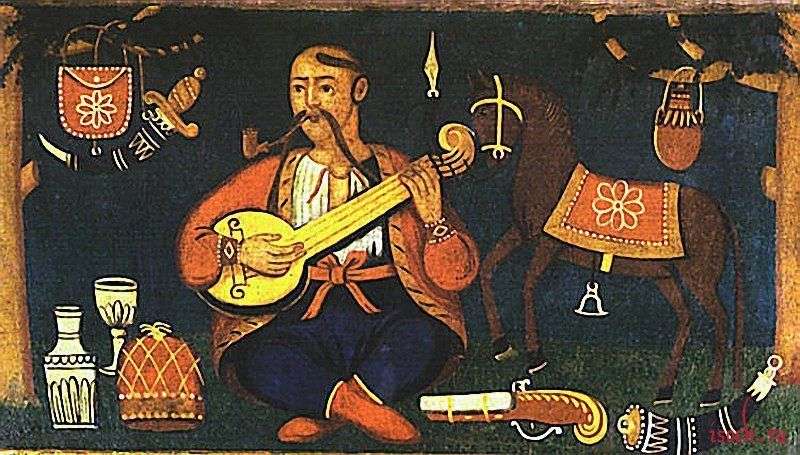 The Cossack Mamai is a famous Cossack who goes around the world and helps people in trouble, fights for the truth and does not spare the offenders. In many houses of that time, the image of the Cossack could be found near the icons. People equated him with God. He got his nickname from the expression mother, which means traveling, walking. In those days, many paintings and images of the Cossack Mamaia were created, but the names of the artists, unfortunately, are unknown.

Many pictures of this kind were similar in detail. All depict a seated Cossack with a bandura in his hands. On the head is a long oseledets, and in the company is a cradle. Dressed in trousers, boots, white shirt and sheepskin coat. Always accompanied by his faithful and reliable friend-horse.

In the picture he is shown a little behind the Cossack, all alert and ready to rush into battle with the owner. Near Mamaia is his musket, a knife, a headdress and wine. A saber hangs on a tree branch, with which he fights, and a sharp spear stands behind his back. Although the Cossack sat down to rest, at any moment he could jump to his feet and be ready to defend himself or someone else, having delivered strong blows to the enemy.

People believed that he was afraid of nothing and no one. Legends were told about him, they composed poems and sang songs. Many more modern artists have also portrayed the brave Cossacks, without losing the sense of the paintings of old.