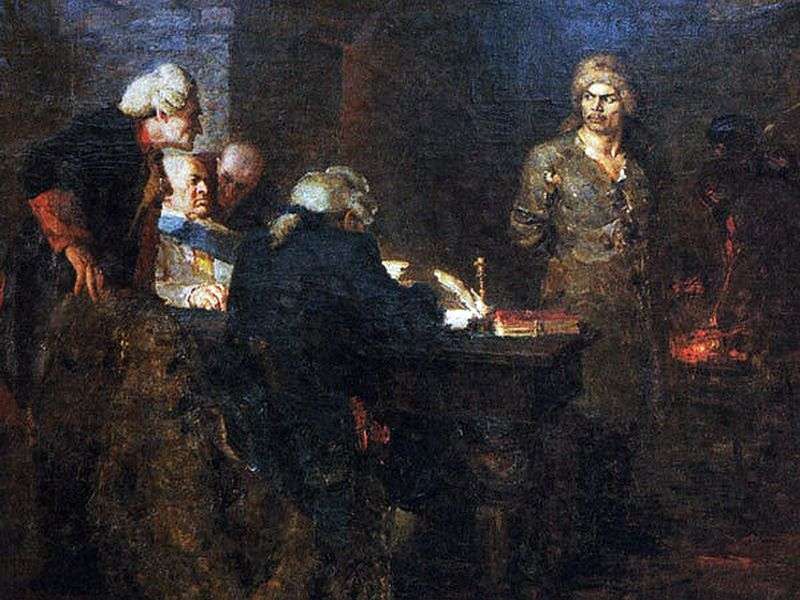 The personality of the hero made the artist a true historian. A. Kuznetsov dreamed of portraying Salavat, and for this he devoted a lot of time to making the picture look as plausible as possible. Batyr, what surrounds him, people and objects, his clothes, everything corresponds to historical documents. And the fact that A. Kuznetsov chose just such an episode from the character’s life shows me a painter as a creator who sings the strength of ordinary people who believe in the superiority of their views and ideas.

The only one whom the viewer can well consider is Salavat Yulaev. He stands facing all who look at the picture. What does his proud look mean, unbending posture? This person is not the first time facing the ignorance and callousness of people who do not even want to admit about the freedom and equality of peoples. And every time Salavat feels that only by his attitude and determination can influence the course of events. Let not these people think and change their decision, but future generations will be told a story, and they have a chance to understand what their rights are worth fighting, despite the obstacles.

The posture of the batyr herself speaks of unbroken nature, and the desire not to bend at any price under the onslaught of threats, bribes and even fear of torture and imminent death. The expression of a stern face told the executioners everything. His huge eyes confidently look at them as a future with courage not a fanatic, but a leader, behind whom are thousands of his fellow citizens.

If you pay attention to those on which the future of the hero depends, then two plans can be noted. On the front there are powdered and powdered officials tied up in ribbons and in camisoles. They see a threat to their calmness in this young man. They already know what they have prepared for him, now they choose means of pity, so that the last moments of Salavat’s life turn into terrible torments. In the background, the executioners, who prepare their sophisticated instruments of torture. Their artist does not even try to draw in precise details, he singles out them only as a dark spot. And this method was effective. The picture with its power of sound awoke in me the pride of those heroes who gave everything for the happiness of many unfamiliar people.