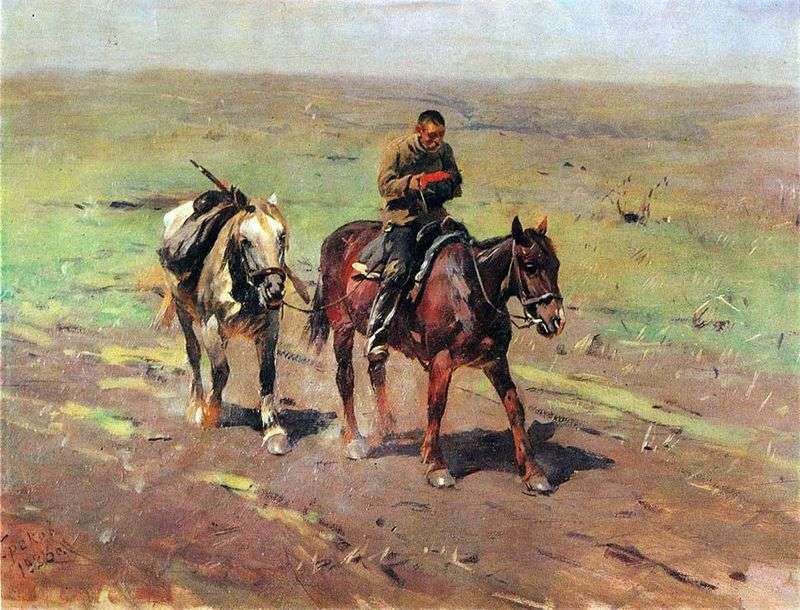 This is the first significant picture of Grekov. Here he continues the tradition of Vereshchagin – avoids splendor. The artist chooses a casual scene – a lone rider is riding along the Don steppe, leading a second reserve horse with a rifle attached to the saddle.

A high raised horizon makes it possible to show the cavalry a colossal open space. It is a testament to the great path that the hero has made. The dangers that lie in wait for him along this path, emotionally give themselves to feel as if in the color of white-hot sky and a sultry haze that has prolonged the distance.

The tension in the color is also brought by short shadows, falling on the road with sharp spots. The artist depicts the moment when the horseman was able to finally attach a red ribbon to the hat, symbolizing the case for which he will fight. Poor clothes and the absence of Cossack lanterns, a poor rifle instead of a cavalry carbine speak for themselves eloquently. This is a peasant, a Cossack from a village.

His conspicuous stoop is associated with long-term peasant labor behind a plow or sow. He goes to his like-minded people, defending the freedom and happiness of the people.