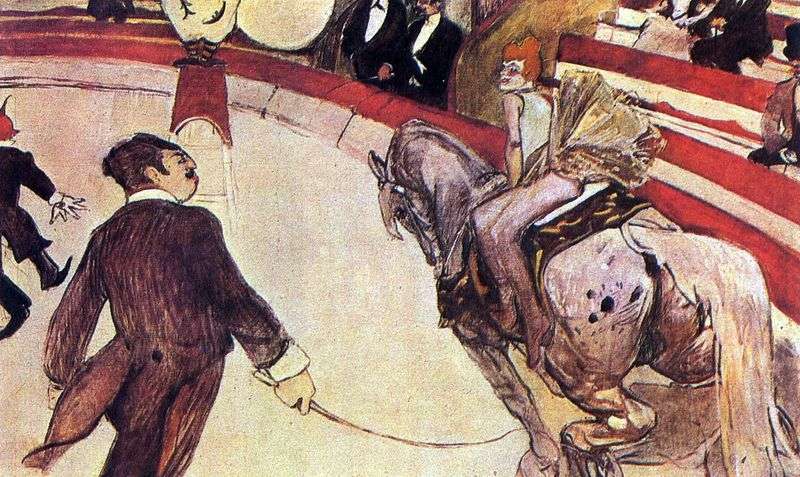 Lautrec worked more and more fruitfully. He enthusiastically painted the picture behind the picture – the scenes in “Elise-Montmartre”, portraits, sketches from dancers and clowns. In the autumn he painted a big picture – the size of her meter by two: in the arena of the circus Fernando the rider jumps, and Monsieur Loial with the whip in his hand drives the horse. In this picture – a picture of the master, although the artist is only twenty-four years old! – the composition is solved boldly and unusually, here Lautrec seemed to have found his formula, mastered the “craft of plaster”.

After tearing down the naturalistic transmission of the visible, with the laws of perspective, and with the discoveries of impressionism, Lautrec, taking from the Japanese what he needed, in his own way decided the space and the transmission of movement by the rhythm of contour lines, very expressive and arbitrary. His style was defined by colored valera, subordinated to the basic tone of the picture.

A rider in the circus Fernando is a young woman from a rich family who, having fallen in love with her riding instructor, left her husband and, following the vocation, took up vaulting and jiggeting. Lautrec asked her to pose in his studio. Etudes, which he wrote from her, were made on cardboard with large strokes. In these works, he combined the technique of Van Gogh with the reception of Raffaelli. The reception consisted in the fact that a thin layer of paint was applied to sheets of cardboard with a thin layer. Cardboard absorbed it, and she acquired a matte texture of pastels. Bold, broad, separate strokes Lautrec wrote down the background. Working in color, he painted with a brush, so his work acquired a sharp characteristic, which could not be applied to works that were solved more gently, using conventional methods. Lautrec worked out his handwriting.

For several reasons, this work is an important milestone in the work of Toulouse-Lautrec. Firstly, this is his first reference to the theme of the circus, which excited the artist from childhood. Secondly, this is his first complex, multi-figured composition, performed on a large canvas. Thirdly, it is in this work that Lautrec decisively moves away from the impressionistic manner of writing a broad flat brushstroke. Some uncertainty of performance is more than compensated by the vividness of the image.

Circus Fernando opened in 1875 and very quickly became one of the main attractions of Montmartre. At that time it was one of five permanent Parisian circuses. Later, the circus received a new name – “Circus Medrano”. Under this name it was immortalized on the canvases of a number of famous artists of the early XX century.